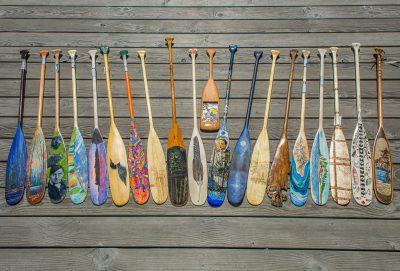 Photo: Some of the paddles entered into the contest. Supplied by Randy Mitson.

Time is running out to get crafty and support local art. Algonquin Outfitters’ paddle art contest closes at the end of August.

Marketing Director Randy Mitson says the goal of the contest is to give back to the local arts scene and honour the 100th anniversary of Tom Thomson’s death. Participants can pay $25 to sign up, which Mitson says covers the cost to run the contest.

Mitson says they will get a blank paddle with that, which will then be decorated and auctioned off in September.

Mitson says so far around 700 people have signed up for the contest, and Algonquin Outfitters has received around 60 back. He says they expect to get at least 100 by the end of August, all of which will be entered into the online auction where anyone can bid on them to purchase.

He says the money raised from the auction will go into two different charities, one of which is the Oxtongue Lake for Arts and Culture.

Mitson says the other charity is Huntsville’s reserve fund for future public art acquisitions, because the town has let the closing event run at the Algonquin Theatre in September.

The contest opened in spring of 2016 and closes August 31st 2017. After that, pictures of all of the paddles will be put online and the bidding can start. The auction will end on September 29th, which is the same night as the live event at the theatre, so everyone can come out and see the paddles in person.

Mitson says there are prizes for the artists whose paddles bring in the most at the auction. He also notes there are some local artists that are creating a paddle, but don’t want to be part of the contest and are just taking part to help raise money. Mitson says that way the general public can still compete without having to take on established artists.

You can pick up a paddle at any of the Algonquin Outfitters locations, or find more details on its website: