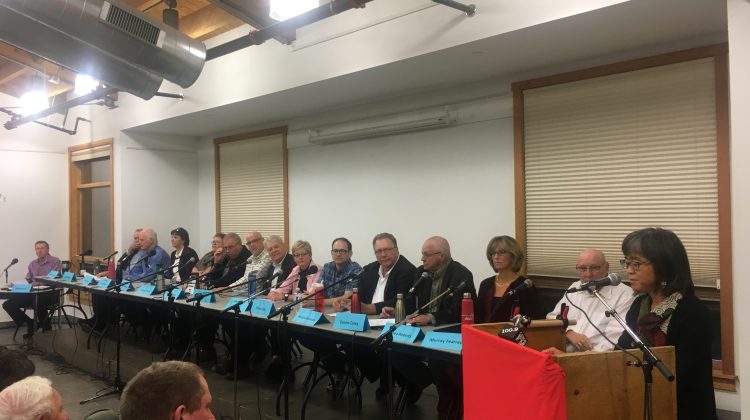 Dysart residents were given their chance to ask the candidates what the next term will look like if they’re elected.

The main hall of the School of Art and Design was filled to capacity with Dysart residents trying to learn more about the candidates for mayor, deputy mayor, and councillors for Wards One, Two, Three, Four and Five. 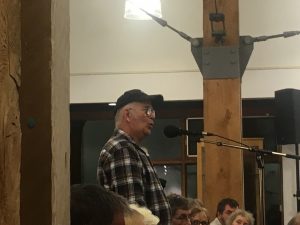 A Concerned Citizen Asking the Candidates About Septic Systems

Andrea Roberts, a 12-year member of the council is hoping to be “your next mayor,” saying that if elected she’d use a team approach to council. Roberts explained that if elected she will go after creating plans for housing, townhall style meetings, and more dialogue and discussion. Murray Fearrey, the incumbent mayor, said that he has a good grasp on the what the community wants and needs. Fearrey says that he is willing to embrace change and make balanced decisions.

Dennis Casey, a long time member of the council, felt that his financial experience if elected deputy mayor would benefit council and Dysart as a whole. Casey introduced himself by saying that being a good leader is not about your personal opinion but rather being a team player. Patrick Kennedy, the former Director of Emergency Services, said that he cares about the community and has raised a family here in Dysart. Kennedy feels that his leadership, character, and vision make him ready to tackle the issues that face Dysart over the next four years.

Nancy Wood-Roberts, a full-time nurse, explained that she has been the Ward One Councillor for a term so far, adding that she started working weekends during her term just to make sure that her day-job doesn’t stop her from being a good councillor. Bram Lebo opened his introduction by saying that every day he is reminded how lucky he is to live in Haliburton. Lebo expressed that housing is a huge priority for him, adding that there is no plan in place to address it. He believes that a plan is needed, saying “you can’t sail the seas without a map.”

Larry Clarke, David McKay, and Mike Stinson are all vying for a seat at the council, representing Ward Two. Clarke expressed a feeling that “our community represents Ontario’s best living.” Clarke said that Dysart needs support for young families and seniors. He also said that climate change is hurting the area. McKay, a lifetime resident of Haliburton and former firefighter, suggested that he will work hard to address the errors of the past and push towards the future. McKay told the crowd that he will approach the council with the same passion and commitment he had when with the fire department. Mike Stinson, a 27-year member of the roads department, said that he wants to address the issues with septic systems now.  He suggested more septic inspectors need to be hired to speed up the septic re-inspection program. 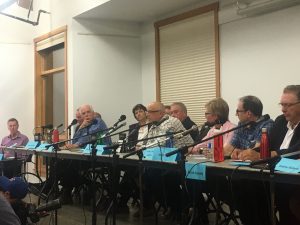 The Candidates All Listening to David McKay

Cindy Baumhour and Tammy Donaldson are the candidates for Ward Three. Baumhour, a long time resident of the area, said that she’s been doing volunteer work since her teen years and is currently the Treasurer of the Harcourt Hall board of directors. Donaldson said that she has raised her three children here. She added that she runs a day camp in Ward Three. As of this year, she was recognized by the Provincial Government for 25 years of volunteer work.

John Smith, who is running in Ward Four against Aaron Walker, said that through the campaign so far that he has knocked on 1,600 doors. He kept his introduction short saying that all of his info is on his website. Smith closed by saying that a councillor position is a part-time role that needs someone to be available full-time. Walker, the owner of McKeck’s Tap and Grill, told the crowd that he has lived in Ward Four for 19 years adding that youth retention and affordable housing are musts.

Incumbent Ward Five Councillor and former NHL player, Walt McKechnie explained that he has been the Ward Five councillor for two terms now and hopes for a third. McKechnie said that he has tried to represent every person in Ward Five, as well as tried his best to address the concerns of his constituents. Glenn Scott, the sitting president of the Haliburton Lake Cottagers’ Association, said that he has lived in Haliburton for 40 years, adding that he’s been attending council meetings for a while now and feels that there is room for improvement. 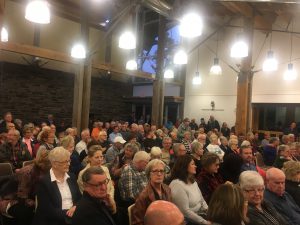 The crowd waiting patiently to ask their questions

One of the biggest themes of the night was accessibility and the growing senior population in Dysart et al. Bob Stinson, the President of the Haliburton chapter of the Canadian Association of Retired People, asked the candidates what their plans are for the approaching “senior tsunami?” Wood-Roberts explained that Dysart needs more apartment buildings like that of the Echo Hills retirement living. Fearrey and Casey both felt that the announcement of the potential assisted living centre being built here helps. Casey suggested that affordable rentals could help “fill the holes” left after the assisted living facility has its 74 units filled. Fearrey said that council is getting close to solidifying the assisted living centre, adding that he wants to see that through. He also suggested that the creation of that centre will create jobs, and once seniors move into it, that is potentially 74 homes that can be occupied by those in need. Lebo expressed that it is a good thing if an assisted living facility does come here, but he added that the results of housing efforts so far are not good enough to put a dent in the need for housing. Roberts told the crowd that four years ago there was an area zoned for housing that seniors could use, adding that there is a variety of programs offered by the Haliburton Highlands Health Services for seniors as well.

On the topic of seniors, a concerned citizen pointed out that 60 per cent of downtown is not accessible for seniors and asked: “how can I feel confident that accessibility will be addressed before the ‘senior tsunami’ makes landfall?” Walker, the owner of one of the downtown businesses said that he is willing to look into making the downstairs of McKeck’s accessible for seniors. Stinson pointed out that at one point there were ramps throughout downtown to help seniors get in and out of businesses but they don’t appear to be there anymore. Casey explained that the ramps mentioned by Stinson received complaints and that is probably why they are gone, adding that they were a tripping hazard. McKay, a stroke sufferer himself felt that accessibility programs need to be brought into action. Kennedy believes that the private ownership of the businesses in town is part of the problem and encouraged the renovation of downtown would help. Lebo, a former lawyer, explained that he knows there is a cost associated with increased accessibility, but added that it is a must and that he’d work towards finding funding to address it. Clarke said that he wants to address the long-term growth of accessibility, adding that he would like to see businesses encouraged to add to their own accessibility.

The other end of the age spectrum was brought up several times. One person asked what the candidates plan to do to keep younger people here. Multiple candidates suggested that adding some kind of trades school in the area would keep teens and youth here and create skilled labourers which are much needed here. The majority of the candidates felt that housing needs to be addressed to get younger people to come and stay in the area. Lebo felt that council should stop “putting all their eggs in the tourism basket,” adding that housing is a number one priority. Wood-Roberts said that kids want to stay here but need to go away for school and don’t come back because they don’t have anywhere to live. Fearrey said that he had spoken to the Fleming employment crew, adding that there are lots of jobs here, just not the appropriate training to get the youth into those jobs. Roberts echoed the sentiments of her opponent adding that there need to be collaborative efforts to connect youth with the jobs in the area. 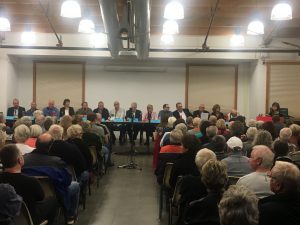 A View From the Back of the Hall

Sustainability of the environment was brought up through several questions, including: will there ever be a by-law to address fireworks being set off multiple times a week? and what the candidates felt about the shoreline preservation by-law? All of the candidates showed a fondness for the by-law. Scott pointed out the importance of it, by reminding that there was a blue-green algae outbreak in the county. Smith is for the by-law but suggested that perhaps a heavier fine to the sum of $100,000 for clear-cutting the trees on your shoreline would be an effective deterrent. Lebo said that he would support direct funding for groups that restore shorelines. He also questioned why the current council has taken such a passive approach. a couple of the candidates felt that more education is needed for the tax-payer to address that ahead of time.

As for the fireworks by-law, Casey pointed out there is already one in place but added that he would support a new one that puts restrictions on when and how late they can be used. The idea of by-laws that limit when they can be used was supported by several candidates. Lebo felt that the current council had all said they know the effect fireworks have on the environment, but adds that they don’t enforce the by-law that’s already there. McKechnie felt that three times a year stipulation would be reasonable. Several candidates felt, like the shoreline by-law, there needs to be better education for the tax-payer.

A one-off question that stood out from the night was posed to the mayoral candidates. They were asked what is their philosophy on leadership, how they see leadership, and Fearrey was asked how he deals with the pitfalls of being mayor for 30 plus years. Both Fearrey and Roberts explained that you need to work with the council. Fearrey pointed out since he’s taken office he’s only lost one councillor. He added that leadership to him means getting the whole team involved. Roberts felt that a good leader works towards getting every councillor to agree with decisions.

The night wrapped up at exactly 9:00pm with the moderator Sue Shikaze expressing the importance of taking to the polls and voting.