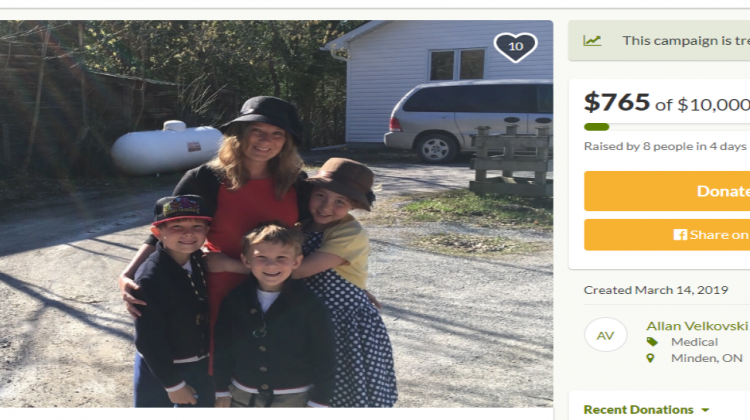 the photo on the Velkovski GoFundMe page

A Minden man is trying to raise money to help with the cost of his wife’s cancer treatment.

Allan Velkovski reached out to MyHaliburtonNow.com in hopes of drawing people to a GoFundMe page he started for his wife Rachael.

Velkovski said they are hoping to raise at least $10,000 to start. The reason for raising money is because as it sits now, they are taking four rounds trips a week to Toronto.

Adding to the expenses is the fact Mrs. Velkovski is also trying to preserve her eggs as chemotherapy will make her infertile. Velkovski says that is not covered by OHIP or her private benefits plan.

Another cost facing the Velkovskis is the fact that after the cancer is gone, she will have to take the hormone medication Tamoxifen for between five to 10 years. Velkovski says the drug costs roughly $200 a month.

“With any donations, Rachael will be able to stay afloat and not drown in the sea of unexpected expenses that come with any cancer diagnosis. So I am asking anyone that can donate to help my wife Rachael to keep her in the fight and beat this deadly disease.”

A link to the Velkovski GoFundMe page can be found by clicking here.