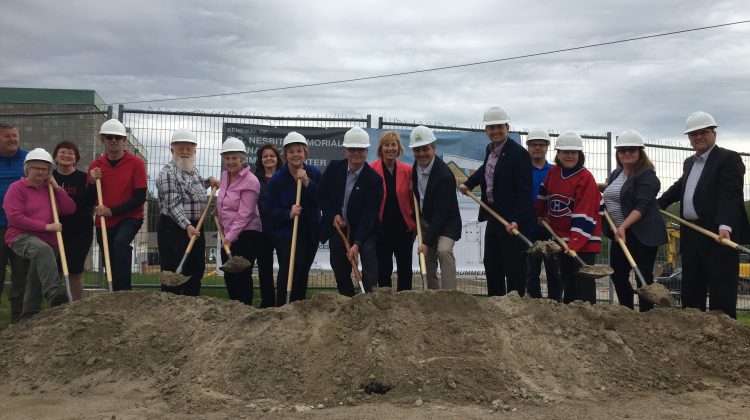 MINDEN HILLS, ON- Political figures and stakeholders are celebrating the renovations to the S.G. Nesbitt Memorial Arena.

Although the demolition of the building started a couple of weeks ago, a wide range of people from community members, to municipal staff and councillors and even the MPP and MP showed up to break ground on the arena project.

The original groundbreaking was scheduled for earlier in the year but the flooding and state of emergency in the township took precedence for the mayor and staff, which lead to today’s event.

Despite the fact that Haliburton-Kawartha Lakes-Brock MP and MPP Jamie Schmale and Laurie Scott were on hand, Minden Hills Mayor Brent Devolin was the only person to give a speech.

The multi-term mayor touched on the history of the building and seeing it for the first time when his family moved to the area. He says that it was built in the seventies because it was there by the time the Devlin’s moved in.

Devolin took time to thank the councils of old, the council of the ’70s and ’90s that were forward thinking enough to invest in the community’s future. He also thanked the councils that he has served on since the idea of renovating or upgrading the arena first came up.

Although some councillors of the current term voted no on the project, Devolin extended his thanks to them as well saying that despite their no’s they have been incredibly supportive once the decision was made.

Mayor Devolin also explained the reason they are building a whole new one. In 2010 people began to look at and notice that the life span of the arena was coming to an end, and a second look in 2014 made that clear.

“It was a bold move,” said Devolin.

“History will tell if it was the right bold move.”

The arena project carries an over $14 million price tag, and so far the demolition and construction are on time and on budget.