UPDATE: Outage from Eagle Lake to Gooderham reported by Hydro One 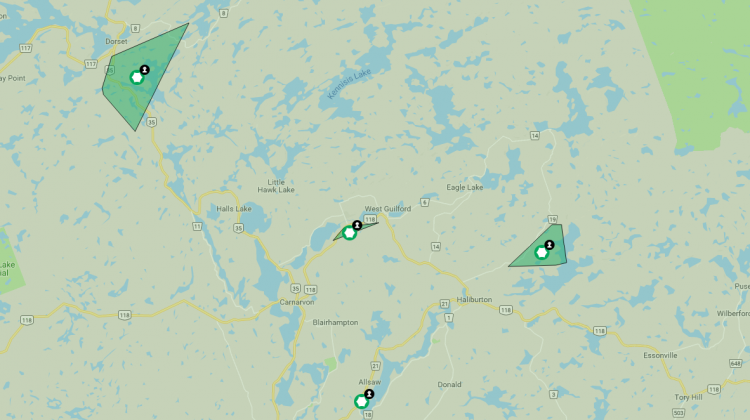 UPDATE- 2:32 pm: Although Hydro One had made progress restoring power across the county, two more outages have popped up.

Hydro One’s outage map shows there is a pair of outages knocking out power for hundreds of customers from just south of Eagle Lake all the way south to Gooderham. Power is expected back for those people by 5:15 pm.

The Harburn Road outage is being reassessed.

UPDATE: The only outage remaining is the one along Harburn Road, the rest have been restored according to Hydro One.

HALIBURTON COUNTY, ON – The clouds aren’t the only reason that people across the county are waking up to darkness.

According to the Hydro One outage map, there are four different outages in the county.

The biggest of which is affecting customers in Dorset from as far west as Highway 35, to as far east as Kawagama Lake Road. Hydro One says that outage is affecting 270 people. Crews have been dispatched but the situation is still “pending classification”. The estimated restoration time is 10:45 am.

Another 217 customers are without power along Harburn Road and as far north as True North Road near Drag Lake in Dysart. That outage is also “pending classification” and it is expected back up by 10:15 am.

56 people from Garden Gate Drive to Deerpath Lane along Highway 118 can expect their power shortly.

The smallest of the outages is between Highway 21 and Kashagawigamog Lake, 54 customers there are without power. Hydro One believes they will have power again around 10:00 am.

MyHaliburtonNow.com will update as power gets restored.