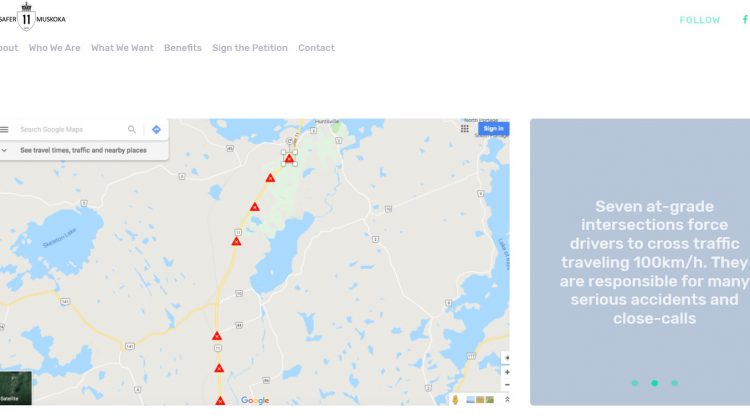 A screengrab from the group's website, outlining their goals. Image sourced on July 15th, 2019.

HUNTSVILLE, ON- A local group wants to see some changes on a major cottage country route.

That group is Safer Highway 11 Muskoka. They’ve become active in recent weeks, launching a website and social media accounts, all of them advocating for a change to the highway intersections along the route between Huntsville and Bracebridge.

According to Kevin Powers, a part time resident of Harp Lake and the spokesperson for the group, the stretch of highway has seen around 690 accidents in the last 10 years. He believed those were caused by the intersections being at-grade, with high speed traffic posing a threat to anyone trying to merge.

Powers indicated that the provincial government had looked at the idea of changing those intersections around 10 years ago, with a study finding that improvements would raise safety “significantly” along the route.

He’s hoping that the group can collect enough voices from the area to get the province to take action on that study. Work on finding those voices is ongoing, starting around Harp Lake and extending to other cottager associations in the area.

“You can’t throw a rock and not hit somebody who’s had problems on this interchanges,” said Powers.

“Near misses, they know of somebody who’s been in a collision, and we decided “what happened to that project? Why didn’t that project make it?” We decided that it was time that this government re-visit that.”

The group is hoping that the province could commit to two new flyover bridges and safe interchanges at either end of the Huntsville-Bracebridge corridor.

Powers indicated that cottager associations on Waseosa Lake and Ripple Lake have signed their petition, and there are plans to approach the area’s municipal governments in the near future. They’re hoping to get “critical mass” before going to the provincial authourities.

“This is a government that is for the people, and we wanted to get a number of people who have signed on, and show that there is momentum behind this movement,” said Powers.

More on the group can be found at their website: https://saferhwy11.nationbuilder.com/