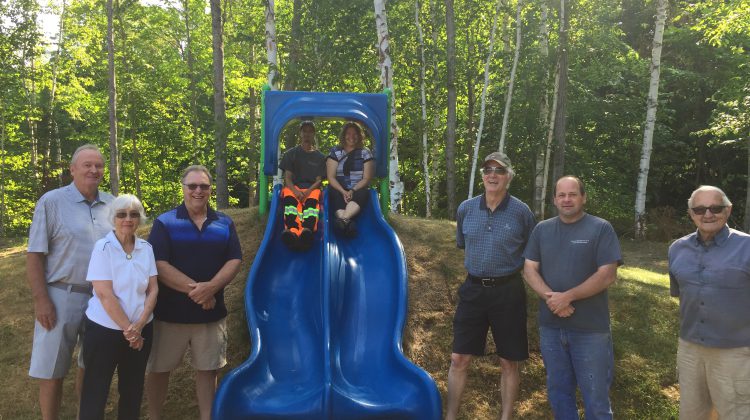 The group of people who showed up for the grand reveal (photo taken by Phil McCabe, MyHaliburtonNow.com staff)

EAGLE LAKE, ON – An old playground has a new look.

The Municipality of Dysart et al opened a playground right at the Eagle Lake Beach.

According to the Dysart Recreation Program Coordinator, Andrea Mueller, the renovations and upgrades to the playground were thanks to an Ontario Trillium Foundation grant.

Although the playground has been there for decades, Mueller explains the site was in need, saying that everything at that site needed to be replaced.

All told, the Ontario Trillium Foundation grant, funded roughly $86,000 to replace the equipment and Dysart had shelled out some money for the labour costs and things of that nature.

Speaking about the playground itself, Dysart Parks’ staff pointed out that the wood chips there are engineered to be softer and safer than traditional wood chips. The chips are bouncier and thus more forgiving if a child were to fall on them.

Mueller said they were hoping to open the playground sooner, but noted that weather delayed their work. As well, a fire at the factory that makes the equipment delayed the installation even more.

Long-time residents Al and Elenor Bagg were at the unveiling of the park, with Al saying that years ago the grounds that are now park used to be a swamp, and Elenor saying that Eagle Lake women years ago were the first to install swings and used to pull the swim raft in and out of the beach.

Aside from upgrades to the playground equipment, the grant also allowed park staff to install washrooms on site that will be available to use in the winter.

Playground equipment was also installed in West Guilford as part of the grant money.