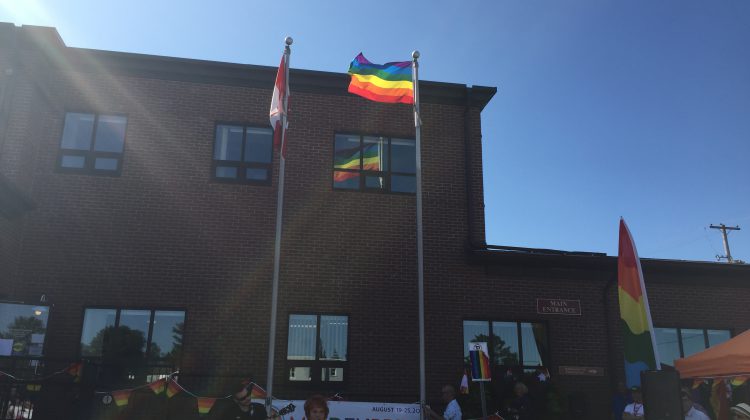 MINDEN HILLS, ON – On-lookers got insight into the origins of Minden Pride during a speech by the event’s chair.

Yesterday, David Rankin, the Chair of Minden Pride spoke in front of a crowd celebrating the start of Pride Week.

During his speech, Rankin explained that this year is of special significance to the LGBTQ2+ community due to their connection to the 50th anniversary of the Stonewall Riots.

According to Rankin, the patrons of the Inn started a movement of resistance following the raid. He says Although there were other protests and resistance in that time period, the six day-long Stonewall Riots are largely seen as the beginning of the Gay Rights Movement.

Illustrating the connection to the riots, Rankin explains that each year the pride celebrations would be around the 29th to coincide with the riots.

“Pride is on-going,” says Rankin who goes on to say that many LGBTQ2+communities celebrate at different times of the year.

This year, Ottawa’s Pride Week is running at the same time as the Minden Pride event.

The local celebrations were conceptualized and eventually organized after a store in Haliburton was vandalized as an act of homophobia.

Speaking about the week-long celebration, Rankin says this year there was a banner that was removed from the Logger’s Bridge. He also says the motive behind its removal is unknown, but since the announcement on Facebook, Minden Pride had received hundreds of outpourings of support for their event.

He says that despite the majority sharing their supportive messages, there was also “a very small, but nonetheless, concerning group of people have chosen to send messages expressing their ignorance and bigotry.”

“We need to show those who identify as LGBTQ2+, that they are not alone, and that they have a strong and vibrant community and allies who will stand together with them.”