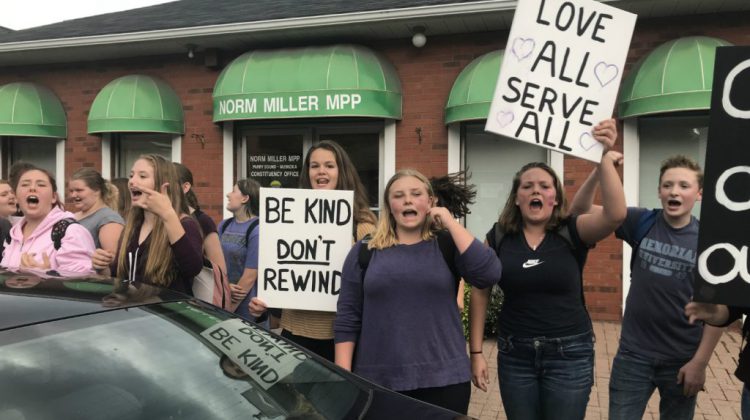 Students and parents alike protested the announcement of a change to the sex-ed curriculum last September. (Doug Crosse - MyMuskokaNow.com)

That is the word from Director of Education for Trillium Lakeland  School Board, Larry Hope after the new curriculum for sex education for elementary students was introduced by the Ontario government yesterday.

“It is very, very fresh for us,” said Hope. “We’ve had very little opportunity to get into it with a fine-tooth comb.”

In making the announcement the Ministry of Education called the change to the Health and Physical Education segment for Grades 1 to 8 “enhanced and inclusive”.

Elements include mental health, cyber safety, body image and bullying among others.

Hope says the biggest change is not so much the curriculum but the timeline in which it is being introduced.

“The more significant changes that we’re going to see will be more about when certain topics are taught to students,” he said.

The conversation surrounding sexual identity shifts by a year from Grade 6 to Grade 5. Gender identity, previously taught in Grade 6 is now introduced in Grade 8.

The biggest new change will be the requirement to allow parents to pull kids from certain segments of the sex education stream. It is a piece Hope is confident will not be a problem.

“We’ve always had parents who have objected to certain topics being taught at school,” Hope admitted. “We’ve done our best to work with families to accommodate when we can. We’ve certainly had other. . . accommodations for students along the way, whether they be religious or otherwise.”

He said the job now will be to formalize a policy for parents.

“We will be required over the next while to establish policies and procedures that speak to . . . informing parents about when certain topics that might be deemed to be controversial will be taught in the classroom and we also know that we are required to establish policies and procedures for parents to opt-out of certain topics they may not wish their kids to be taught at school.”

When changes were first announced by the Doug Ford-led government protests by teachers, students and parents emerged as the understanding was there would be a reversion to curriculum introduced in 1998. Exhaustive consultation with stakeholders seems to have softened that stance. Elementary Teachers Federation of Ontario President Sam Hammond credits the rank and file of teachers for keeping sex ed “very similar” to the 2015 version. He does object to the opt-out clause, saying “You do not get to opt out of human rights.”