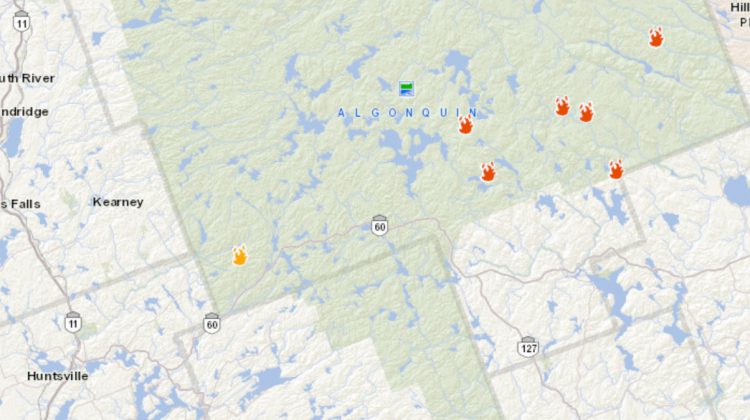 A map of the current fires in the park, sourced from the provincial fire map on August 28th, 2019.

ALGONQUIN PARK, ON- More than half a dozen forest fires sprang up in Algonquin this week.

According to the Ministry of Natural Resources and Forestry, six of the fires are burning in the northeastern section of the park, with the second-largest at 5.8 hectares in size.

That fire is Algonquin Park #23, located three kilometres north of Grand Lake. Three fire ranger crews were tasked on the blaze and water bombers were used earlier in the week, on Sunday and Monday.

According to the ministry, the fire is now being held.

The largest is Algonquin Park #19, which is one kilometre west of Foys Lake and close to Swamp Lake.

The ministry confirmed that the fire is still being held at 7.6 kilometres.

All the other fires are less than a hectare in size. They are located northeast of Pine Lake, between Booth Lake and Shirley Lake, east of Lee Lake and between Batise Creek and Gross Creek, and all are being held as of this report.

One new fire, Algonquin #25, has lit five kilometres north of the the Highway 60 corridor through Algonquin in the southwest corner of the park. It is currently listed as not under control, but there is no concern for the public.

The causes of the fires are all under investigation, with no clear source as of this report.

There are no air assets in play to combat the current fires. However, fire risk in the park remains at moderate to high, due to drought conditions.

Though rain is expected to help in coming days, anyone who sees smoke or fire in the park should call the authourities to report what they’re seeing.

If you’re south of the French/Mattawa River, call 911. If you’re north of that river system, call 310-FIRE.