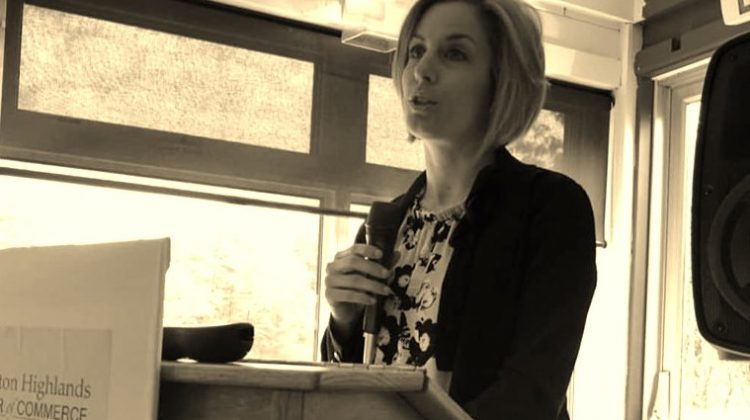 Jennifer Locke is shown in a photo released by the Chamber.

HALIBURTON, ON- The Haliburton Highlands Chamber of Commerce has a new leader.

In an announcement this week, the chamber said they had updated the title and job description for their head role, introducing Jennifer Locke as Executive Director.

They say the change will bring a modern and strategic focus to the organization, with a level of professionalism that would reflect the scope of work it takes to stay relevant and provide value to chamber membership.

“The Board of Directors has considered the role in the context of the future of the Chamber,” said Andrea Strano, HHCC President, in the announcement.

“This is a great opportunity for Jennifer to provide thoughtful leadership to the Chamber; we are certain she will surpass all of our expectations.”

The Board of Directors voted unanimously to approve the change at the September 3rd, 2019 meeting.

Locke came to the Chamber in May of 2018 after achieving Master’s degrees in sustainability in both Ontario and Saskatchewan, with a focus on Canadian corporate sustainability. Prior to that, she graduated from Haliburton Highlands Secondary School, later attending Western University and the University of Saskatchewan.

She’s found success as a consultant for provincial and local governments, large corporations, and small businesses in the county.

“I am so humbled and flattered by the level of support I have received from the board,” said Locke, in her announcement.

“They are such wonderful assets to this organization and the community. I believe passionately in this chamber and its capacity to enhance our local economy.”