Ontario Legislature adjourns until September; MPPs to return to their ridings 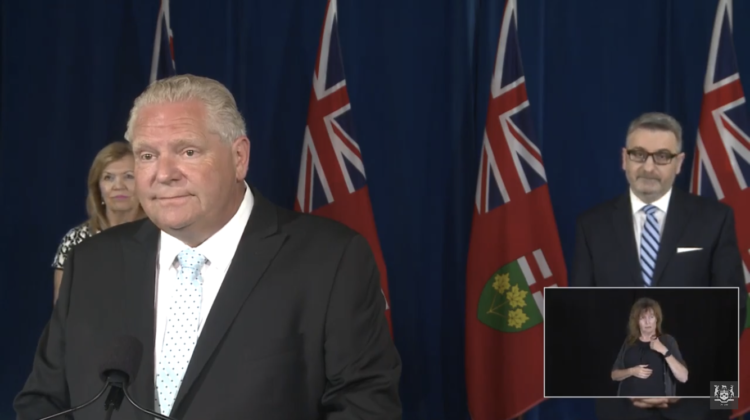 The Ontario legislature has adjourned until September. That announcement was made by Premier Doug Ford Wednesday after what he called an unprecedented and historic sitting of the Legislature where 18 pieces of legislation have been passed since February.

Ford says collaboration of every political party was more important than ever, “In our hour of greatest need, MPPs stood shoulder to shoulder as Team Ontario to protect the public during the COVID-19 outbreak. The people of this province expected us to work together and we reached across party lines to quickly introduce and pass critical legislation. We will continue to work for the people of Ontario to help them get back on their feet as we chart a path to recovery for every region in the province.”

Ford defended the decision to adjourn the legislature today by saying that MPP’s need to go back to their ridings and talk to their constituents about what is important to them and not remain in the “bubble” that exists in Toronto and at Queen’s Park.

In response to reporter’s questions about his decision to remove Cambridge MPP Belinda Karahalios from the PC caucus after she voted against the COVID-19 omnibus recovery bill Ford said he wished her all the best and had no prior indication she was unhappy with what was contained in the bill.  Bill 195 extends some emergency measures past the July 24th deadline when Ontario’s emergency orders are set to expire, including limiting gatherings, closing public places and policies in long-term care homes along with 20 laws that amend legislation around municipalities and the justice system which Karahalios called “an unnecessary overreach”.

Ford said in part, “This is fully transparent, I’m out here every day.  This is a critical piece of legislation to protect the people of Ontario…making sure long-term care workers stay at one place for the duration of the pandemic, and make sure that electricity rates remain low for Ontarians.  That is what people care about.”

Government House Leader Paul Calandra said today if Karahalios indicated she wanted to return to the PC Caucus in the future that would be tabled and voted on by caucus members.