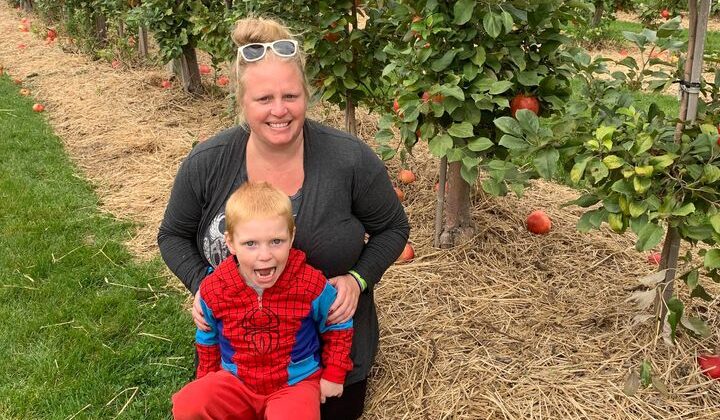 A local mom is inviting everyone to be a bit more aware and a bit more compassionate.

May 14 is Apraxia Awareness Day. For the past three years, Jody Hamilton has been spreading awareness of the condition on behalf of her six-year-old son Nash, who was diagnosed with childhood apraxia of speech (CAS) before his third birthday.

CAS is a rare neurological disorder that affects the pathways from the brain to the muscles used for speech in the mouth and throat. Those with the condition are able to understand speech just fine, Hamilton says, but struggle forming the words themselves.

According to Hamilton, Nash’s case is on the severe end of the spectrum and people who aren’t familiar with him might only understand 30 to 40 per cent of what he says.

“Often people thought that there’s something wrong with him,” says Hamilton. “So I would have to say ‘no, he has a rare neurological disorder, and he fully comprehends everything you say, he just verbally can’t get it out’.”

Hamilton, who lives in Bracebridge and is a paramedic for the Haliburton County Paramedic Service, says she always has information cards on hand to more easily explain Nash’s condition to strangers.

She says the people and institutions in Nash’s life have all been very accommodating, with Nash’s peers knowing to be patient with him.

“He has lots of cousins, and he has a couple of really close best friends. So they all know Nash has Apraxia, and they know [to do] certain things, let Nash have more time to be able to answer,” says Hamilton. “Especially when he’s kind of put on the spot, he needs more time, because he needs the signals from his brains to his mouth to get there. And sometimes they don’t get there, so he’s kind of like a repeat record.”

Since his diagnosis, Nash has gone through regular speech therapy. Hamilton says the number of words he can say has skyrocketed from around 100 to more than 1,000, and he can now speak in up to six words at a time. He’s also learning sign language to make up the difference.

According to Hamilton, the Bracebridge Falls will be lit up in blue on Saturday in support of Apraxia Awareness Day. She encourages people to take some time to learn about CAS, and to wear blue in support, as Nash’s schoolmates will be doing while they learn about the condition.

Hamilton says a little awareness can go a long way.

“They can be inclusive, they can be understanding, they can have empathy,” says Hamilton. “Just getting the awareness out in the public for them to realize that there are certain disorders that people may not know even exist.”

To learn more about Childhood Apraxia of Speech, go to https://www.apraxia-kids.org/.