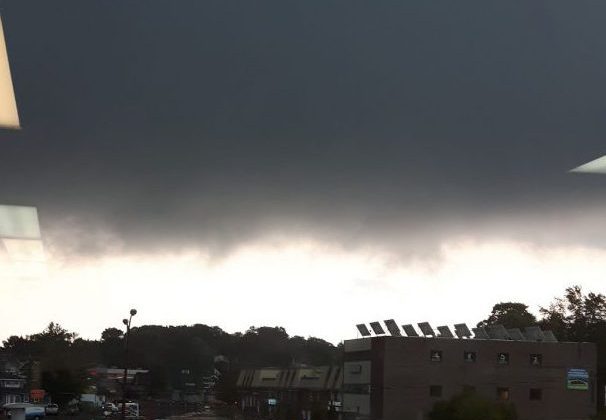 Photo: The sky in Huntsville on Friday night. (Taylor Ablett)

Environment Canada is shedding some light on how the strength and speed of tornadoes are assessed. Meteorologist Peter Kimbell says after the two twisters touched down in Muskoka on Friday, an expert spent two days in Lake of Bays looking at the damage.

Kimbell says that assessment determines how fast the tornadoes are. He says the first twister touched down at around 3:50pm on Friday.

Kimbell says the second tornado then hit around 4:10pm.

He says there has been some structural damage in Huntsville, with at least one house severely damaged, but the full extent of the damage isn’t known yet.

Overall, Kimbell says Ontario gets between 12 and 13 tornadoes a year. However, he points out there are more in the wilderness that Environment Canada doesn’t know about. He says even if you do use the number 12 or 13, that’s not a lot over a wide part of geography.

Haliburton was also under the tornado warning on Friday, but no twisters touched down.