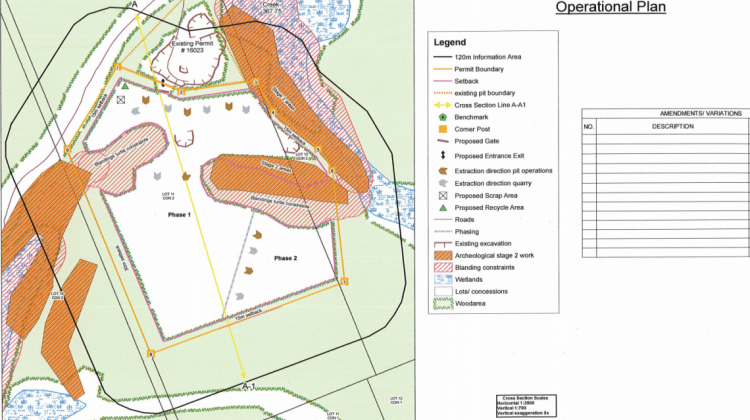 A group of residents opposing the proposed quarry at Harvey Lake are letting the MNRF know. The Harvey Lake Area Residents have submitted a formal objection to the Ministry of Natural Resources, saying the proposed 52-acre McClintock Pit is a large footprint, there will be noise issues, and the work will be bad for the wildlife and environment.

Donnelly Law representative, David Donnelly, submitted the objection to the ministry and says the proposal is on public land, and granite can be blasted in areas that are less sensitive than Harvey Lake. He claims it would have a negative impact on residents in the area, who will hear blasting, drilling and trucking, and may see impacts on their drinking water.

Co-owner of Bacher Construction, which wants to do the work, Eric Doetsch, says the company plans to extract around 10,000 tonnes of rock a year, not the full 75,000 that would be allowed. He also says they will be rehabilitating the pit as they move through it. The MNRF says that could mean turning the area into a wetlands and habitat for wildlife, recreational fishing areas, or farmland.

Doetsch says although the company is asking for 52-acres, it might use five of that in the next 20 years.

Another concern HLAR has expressed is the ownership of the quarry changing. Representative Gary Schuller says the permit shouldn’t be granted based on one person’s character, as it will likely change hands over time. He says it should be judged on noise, environmental risks, and property impacts. However, Doetsch says his son is in the business as well and they asking for a large size so it can be in use for the next 100 years.

The MNRF is currently reviewing the application from Doetsch, which he says includes environmental impact studies. However, Schuller says that report was done by the consultants hired by Bacher Construction and included multiple errors surrounding the noise impact analysis. He also says the  proposed 30-metre setback from the wetlands included no scientific data.

Public meeting on the proposed McClintock Quarry is this weekend