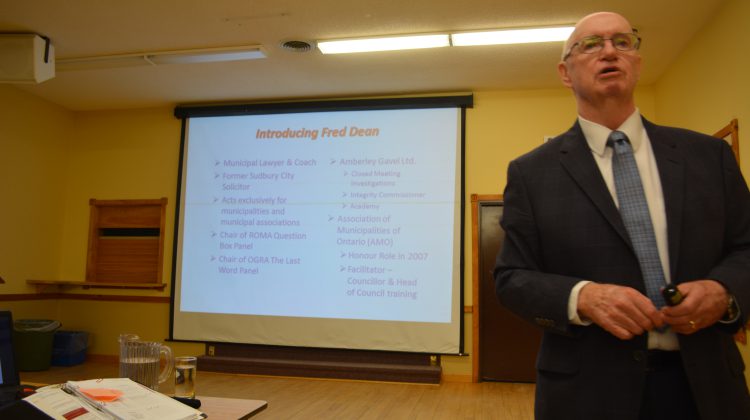 Lawyer Fred Dean introduces himself during the 'So you want to run for council?' candidate information workshop at the Dungannon Recreation Centre on Tuesday, April 24. Photo credit: Andreas Pandikiu - Moose FM.

There is a lot you need to think about before you consider running for municipal council.

That was the message from Municipal Lawyer Fred Dean during the ‘so you want to run for council’ candidate information workshop at the Dungannon Recreation Centre on Tuesday evening. Dean started by explaining to everyone at the meeting that municipalities do a lot of different technical and complex things, so nobody expects a councillor to be an expert in any of them. He also told everyone in attendance that municipalities get all their powers from the province.

Dean also says, although you will not always agree with other councillors, your job is to act in the best interest of your municipality. He tells Moose FM that the job description of municipal council and staff is set out by the province.

Dean also described how being a councillor will affect your personal life, because it’s a 24 hour job. Ultimately, he says you will become a leader of the community for the next four years.

According to Dean, anyone considering running for council should be prepared for the single biggest change to municipal government he has seen in his career. As of next March, municipalities will be required to have a code of conduct for council, along with an integrity commissioner. He says this will change the way that conflicts of interest are dealt with.

Dean also says that councillors will know a lot about their communities, some of which they will have to keep secret from everyone, including their spouses. He says the best way to know what you’re getting into is by asking your municipality for the Oath of Office, and reading it before running.