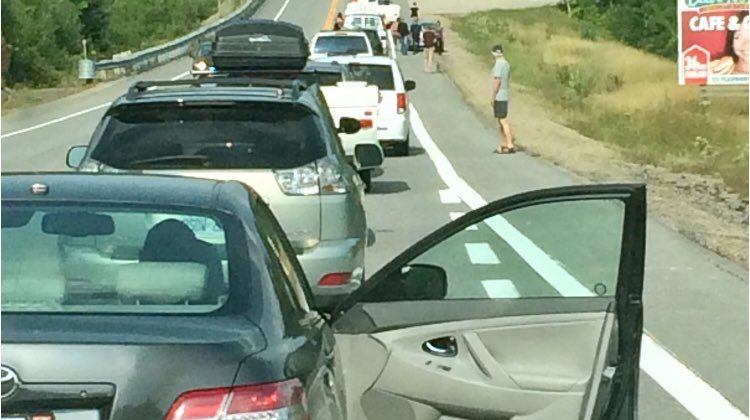 View of stopped traffic on Highway 60 (supplied by @articseamoose, Twitter)

The Huntsville OPP has confirmed two people have lost their lives in a crash near Algonquin Park.

It happened Sunday afternoon at about 4:00pm on Highway 60 at the park’s west gate. The OPP says emergency crews, including Huntsville and Killaloe OPP officers, Algonquin Highlands Fire, Lake of Bays Fire and Muskoka EMS were called to the scene.

The investigation shows the crash involved a tour bus and two other vehicles.  There were no passengers on the bus at the time. The OPP says a small blue car was heading west on Highway 60 when it crossed the centre line and hit the bus head-on. That caused the car to flip and then hit a small black car.

Two people were taken to a local hospital and treated for non-life threatening injuries while a third was airlifted to Toronto with serious injuries. Two others were confirmed dead at the scene. The OPP is withholding their names until next of kin can be notified.

Highway 60 was closed at both the west and east side of Algonquin Park for several hours while police investigated the crash. The Huntsville OPP is thanking all who stopped and assisted with the victims of the crash, including Algonquin Park staff.