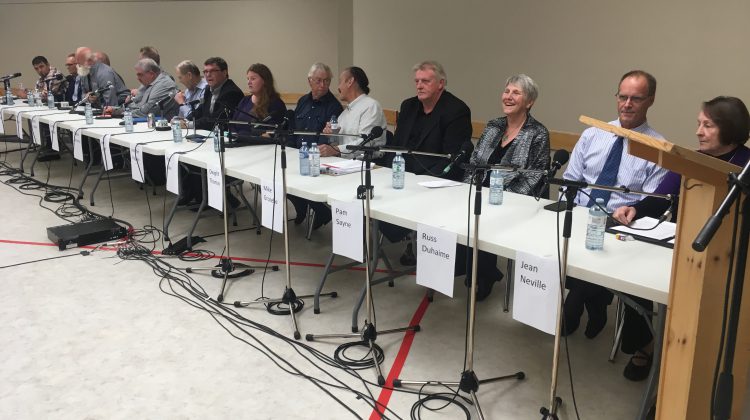 Minden Hills residents came out in full force to get to know their candidates.

With the election less than a month away, Mindenites packed into the Community Centre last night. The exact number of attendees is unknown but it was estimated that there were 300 plus people, all there to ask the incumbents and their opponents about issues that affect Minden Hills. 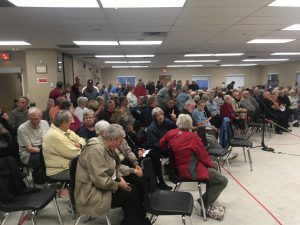 The crowds waiting for the meeting to start

In total there are 16 candidates vying for the position of Mayor, Councillor-at-large, and Councillors for Ward One, Two and Three. Lisa Schell has been acclaimed to the position of Deputy Mayor. In the mayoral race, Brent Devolin is trying to retain his seat against Wayne Hancock and Jarrett Campbell. John Teljeur is hoping to win the Councillor-at-Large seat over the incumbent Ron Nesbitt. There are two councillor seats in Ward One. Richard Bradley, Clayton Cameron, Bob Carter, Jennifer Hughey, Rob Luke and Dwight Thomas are all competing for those two seats. In Ward Two, Mike Grozelle is hoping to dethrone Pam Sayne. In Ward Three, Jean Neville is trying to keep her seat over Russ Duhaime.

As per the norm, all of the candidates were given a chance to introduce themselves. The mayoral candidates went first, starting with Campbell. He said “I’m not a politician or a public speaker. I’m like you…a taxpayer, and I want to make a positive impact.” Devolin, the incumbent mayor, used his introduction to explain that when he started there was a broken relationship between the county and the Town of Minden. Hancock explained that he is a career civil engineer, adding that he has lived in Irondale for generations and he was the director of public works.

Bradley got some applause with his introduction when he said: “you as the people have the power.” He added that he “wants to be a conduit for the people.” Cameron kept his introduction brief saying that you should vote for him because of his 28 years in the public works sector. Carter, a member of the Minden Hills Housing task force, said that he moved back here five years ago, adding that as one of the Ward One councillors he will make his decisions based on what’s best for the community. Hughey, a member of the culinary taskforce and the housing committee believes that her transparency is key to being a good politician. Luke explained that he decided to run because he lives on the water and understands the issues that affect residents. Although he’s running for Ward One, Thomas used his introduction to say that he is willing to listen to all constituents and their concerns. 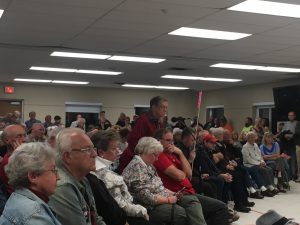 A man trying to get answers over the Landfill

Grozelle kicked off the Ward Two introductions by saying that his family has lived in the area for hundreds of years and him personally for 20. He put lots of emphasis on creating infrastructure for things like sorting out the landfill. Sayne, the incumbent councillor, explained that being a councillor is not easy but she provides leadership and that she wants to be “your voice” on the council. Sayne closed out her introduction by saying that it was her birthday and invited voters to celebrate with her after the meeting.

Duhaime explained that he’s retiring soon and will have the time to dedicate to lots of issues including the landfill, economic development and housing. Neville, the last to speak, says that her years of experience and knowledge has earned her the right to represent Ward Three for another term.

The status of the Irondale landfill came up several times through various questions. What can be done about it? What is being done? What happens if it closes? Sayne suggested that in order for the landfill to be better, Minden Hills residents need to do a better job recycling, adding that it is not an issue that can be figured out in a 45-second answer. Bradley felt that a big fix would be to have Minden staff work there as opposed to contracting out the work. Campbell agreed that it needs to be “run in-house.” Devolin explained that they are working on fixing it, adding that the council has gotten a 25-year action plan. Later in the night, Devolin suggested that they need to accelerate that plan to combat the on-going issues. Neville, like Sayne, felt that there needs to be better recycling and limited use of plastics and single-use water bottles. That drew a reaction from the crowd because there were single-use bottles in front of every candidate. 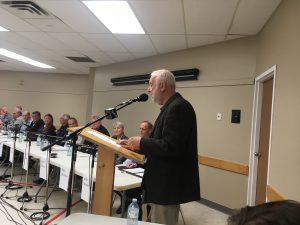 Emcee Jack Brezina going over the ground rules of the meeting

Housing was another reoccurring theme of the night, One attendee asked the candidates “what can you do in four years?” Both Campbell and Devolin felt that the biggest obstacle to creating housing is the regulations and by-laws that limit how and what houses can be built. Bradley, Luke and Thomas felt that the provincial and federal governments need to be brought into the conversation. Thomas explained that he “has no issue knocking on Scott’s door” referring to Haliburton-Kawartha Lakes-Brock MPP Laurie Scott. Sayne suggested that Mindenites put their support and words behind the housing task force. Nesbitt and Teljeur supported the idea of tiny homes, an idea proposed by the housing task force to combat the lack of affordable housing in the county.

A topic that came up throughout the night was the idea of amalgamating the wards into a single government as opposed to the current ward system. That idea split the candidates, Bradley felt that it is doable, but added that if it happens the problem becomes “like the Ghostbusters…who are you going to call?” Hughey was all for it simply asking “why not?” Grozelle got quite a laugh when he said “we haven’t even been elected yet and you’re laying us off,” then added he is for the change. Devolin said that he is on the record saying that he is for electoral reform and he fears that one day something will be forced on them.

The topic of tourism came up when one person asked the candidates “what can we do to make the visitor feel comfortable in our community?” Teljeur and Thomas had similar thoughts. Thomas said that the town needs to be spruced up, and Teljeur felt that the downtown area needs better and cleaner spaces. Sayne and Duhaime were in agreement that the community needs to do better at taking care of the little things. Duhaime added that attitude is key, saying that “we need to be welcoming.” Devolin suggested that the tourism out of Prince Edward County is a model to be followed, adding that tourism and economic development need to be synonymous. Nesbitt and Hughey felt that there needs to be an increase in signage directing people downtown. Neville and Campbell felt that Minden is a gateway to the rest of Haliburton County. Neville says that it has to be the whole community getting involved, not just the individual wards. Grozelle felt that infrastructure growth is the key to sorting out individual needs.

Early on in the night, someone asked the candidates what the role of the council is in instituting a county-wide transportation system.  Collectively there was an agreement that it is an issue. Hughey even made reference to seeing an elderly man trying to cross Highway 35 on foot because that was his only option. All of the candidates felt that there needs to be further research into the topic. Duhaime, Thomas, Hughey and Cameron all felt that it is an issue the county needs to look into. 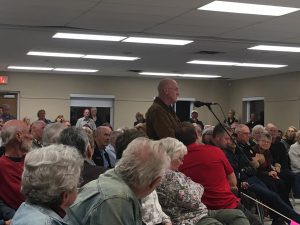 A concerned citizen asking the candidates about the landfill

Another elephant in the room that kept making its way into the conversation was the renovations to the S.G. Nesbitt Memorial Arena. These renovations are expected to carry a price tag of almost $10 million dollars. One attendee pointed out that there was no feasibility study done, and asked Devolin why not while asking the other candidates if they would stop the renovations. Devolin explained that there were two and a half years of research done, and the sitting Councillor-at-Large said that there were hours of conversation about it.

Sayne, also an incumbent councillor, said that it was thoroughly discussed and they did not jump into anything. Teljeur asked if it was so urgent then why did they take so long to decide, and pass up a $2.4 million option that had been previously presented. Hancock said that there need to be more studies and Campbell expressed that if elected “they will 100 per cent stop it.”

One question that got unanimous support was “if elected will you continue the septic re-inspection program, and the Eastern Ontario Regional Network initiative to bring internet to rural Ontario?” By a show of hands, all candidates voted yes they would.

Another all candidates meeting is coming up. It’s for voters in Dysart et al.  It’s happening next Thursday, October, 4th, at Fleming College at 7:00pm.