Potential County Councillors The Focus of the Last All-Candidates Meeting 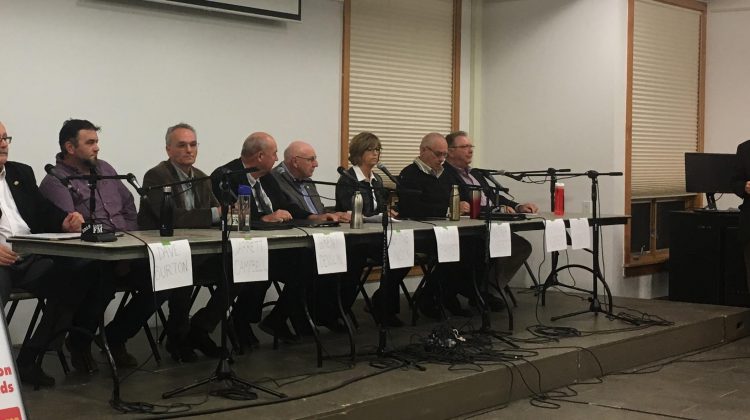 Haliburton County got the chance to ask their candidates about issues that affect all Haliburton Highlands.

The all-candidates meeting last night was designed to hear from the mayoral candidates on how they would address issues that affect the county and not just the municipalities each are trying to represent.

Although Carol Moffatt was in attendance, she was not fielding questions as she has been acclaimed to the mayor’s position already. As well Lisa Schell was there but has already won the position of Deputy Mayor in  Minden Hills. Not in attendance was Cheryl Ellis, who reportedly had family matters to address.

The format of the night was a little different this time since there were only eight candidates there each was given three minutes to introduce themselves. Dave Burton the incumbent mayor of Highlands East kicked off the introductions by saying that he has been mayor for 12 years and wants to continue to do so, he also pointed out that he was the County’s Warden for three years. The Warden position is currently held by Suzanne Partridge who is also running for council in Highlands East. Brent Devolin the current mayor of Minden Hills used his introduction to say that he feels that the structure of municipal politics needs to be modernized before the status quo becomes problematic. Jarrett Campbell, also vying for the mayor’s seat in Minden opened his introduction by saying “I’m not as prepared as everyone else.” making reference to Burton who had a written out speech. Campbell said that he wants to make everything better and closed by saying that he has to go coach his children’s hockey after the meeting. Wayne Hancock the third candidate fighting for the Minden Hills mayor position used his introduction to point out that Minden residents have seen a tax increase at the municipal level, as well as an increase at the county level which he feels the taxpayer cannot afford. He also questioned the decision of the current council to go with the single bid on the S.G. Nesbitt RFP. Dennis Casey who is hoping to be elected as the deputy mayor in Dysart et al explained that he feels policymakers would benefit from his experience and told the crowd he is always prepared. Patrick Kennedy also hoping to become Dysart’s next deputy mayor said that in his 12 years of being the director of emergency services, he learned the difference between managing and governing, adding that he is a careful decision maker and will listen to all sides. Murray Fearrey the longtime mayor of Dysart used his introduction to list the things that his council has accomplished in the years since he took office. Roberts explained that a good leader can only be successful if the council is a cohesive unit, adding that a good leader sets the bar high for themselves and pushes others to do the same.

A big theme of the night was poverty, one person felt that we can not count on the provincial government to help address poverty. They asked the candidates what their strategy would be to address poverty. Fearrey felt that a big issue with poverty is a lack of housing which he believes the creation of the senior centre in Dysart will help, he also said that he continues to work with Fleming College to try and teach kids and get them ready for the working world. Campbell echoed the sentiment that education is key, saying that you can create jobs through training and education. Burton explained that Highlands East is tackling poverty head on and if elected will continue to do so. Devolin said there needs to be a new plan to address poverty. Roberts explained that there needs to be cooperation with the provincial and federal governments. Hancock felt that this is both a municipal issue and a county issue, adding that the most effective style of housing needs to be looked into. Casey believes that a long-term solution would be creating an economic development plan, adding that “a healthy economy means a healthy community.” Kennedy answered by saying that he feels that the county needs to look at the overall strategy and create training programs that fill the niches in Haliburton County.

One concerned voter also touched on the impoverished conditions that some in the county face, adding that currently there are 15 different councillors on the sunshine list. They asked what each candidate thought about restructuring governments to reduce the cost on the taxpayer. hancock said that he supports the idea of reducing the size of Minden Council by at least two members. Devolin said that perhaps reducing the government could work, adding maybe a single tier government would be good. Campbell joked that he wasn’t even sure what the job paid, adding that its “your money, not my money.” Burton said that he’d be willing to look into it. Kennedy explained that he’s all in favour of looking at it county-wide and seeing if there are redundancies that can be cut out. Casey pointed out that there are joint services between the municipalities, but says that the council could take a good look at it. Roberts said that shes heard both sides of the argument and supports the idea of doing a study to increase efficiency. Fearrey stated that reducing the wages of municipal staff would not be cost-effective, adding that they are one of the lowest paid municipalities in Ontario. 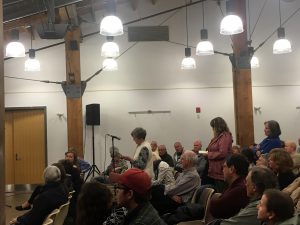 A concerned citizen against the candidates a question

There was a couple questions about a rec centre that Murray Fearrey proposed. collectively the candidates felt that the idea of a rec centre is a must, but their thoughts on how it looks and how to get it differed. Devolin says that the rec centre in Minden has been beneficial. Campbell said “hopes and dreams are sold everywhere during election season” but he added that he would not jump into anything if they couldn’t afford it. Kennedy felt the next step is to get ideas down on paper and see if it is feasible. Casey joked that the bookkeeper in him thinks it would challenging, adding that Dysart can do it alone given the debt of Dysart. Fearrey explained that he would never suggest something if he did not think that it was doable.

Collectively the candidates were in favour of a countywide transit system and they all generally agreed that a traditional bus line would not be effective. Hancock and Kennedy both pointed to the success the town of Innisfil has had so far with an Uber based transit system. A number of candidates were excited to see the study being done into the scope of the need for public transit.