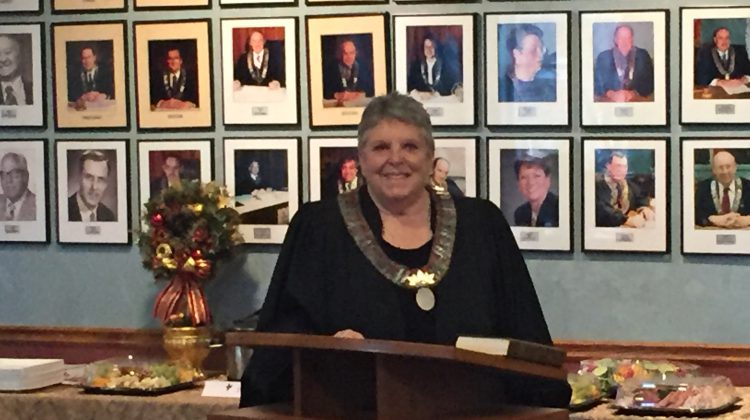 Haliburton County has its Warden for the next term in office.

Earlier today, at a special meeting of Haliburton County Council, the various mayors and deputy mayors gathered in the council chambers to be sworn into their position on the county’s top level of politics.

As part of the ceremony was the election of a new County Warden to replace Suzanne Patridge. Liz Danielson, the returning Deputy Mayor of Algonquin Highlands was elected to be the warden. According to the Haliburton County CAO, Mike Rutter, Danielson was nominated by Dysart’s Andrea Roberts and Highlands East’s Dave Burton. Roberts explained she nominated her because of her background in journalism, as well as her time on council. Roberts noted that Danielson has helped with administrative work and would suggest changes in wording, which Roberts explained was important. The returning Highlands East Mayor explained he nominated her because of her experience and noted she was the right choice.

Danielson addressed the capacity crowd and thanked everyone in attendance, including the Algonquin Highlands department heads that all came to the ceremony in support of their Deputy Mayor. Warden Danielson explained, in her time on council she has learned and heard a lot, but noted that she continues to learn each day.

While wearing the robes of the County Warden, Danielson said the county and all four municipalities need to work together, adding there are decisions and challenges that face both levels of government. Speaking to her fellow councillors, Danielson says that she would like everyone to work together to create priorities for the county to address, whether that be climate change, housing, or transportation. Danielson explained that she feels environmental protection needs to be a priority over the next term.

With Haliburton County Council set, they will meet again tomorrow for their first meeting as a new council.