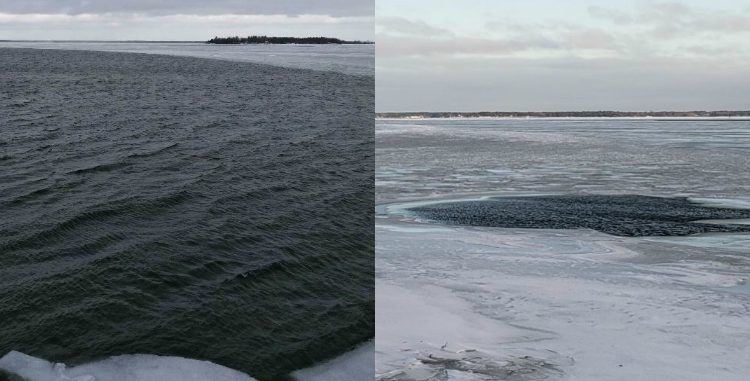 The picture on the left was taken on January 9th at Midland Point. This is what the same spot looked like 24 hours later. (OPP Supplied Images)

It is a cautionary tale for those who ride on the ice.

Just a few days ago a Penetanguishene man headed out onto the ice with his snowmobile heading for Honey Harbour.

He and his machine ended up in open water. The driver was properly prepared, however, wearing a floater suit. He was able to get himself to shore and knocked on the door of a nearby resident, who rendered aid for the hypothermia that was already setting in.

The man, age 34, was ultimately taken to Georgian Bay General Hospital for treatment.

Members of the Southern Georgian Bay Detachment of the Ontario Provincial Police (OPP) say if you are going onto the ice be prepared like the man who went into the water. Have the right equipment including the floater suit, ice picks, a throw line, a GPS and a cell phone in a Ziploc bag as all are important parts of survival.

Keep in mind that first responders may take some time to respond to a water rescue as special equipment is needed and may come from further away.

It is also important to note that more and more municipalities are charging people who go on the ice the cost of a full rescue, which could be many thousands of dollars.

“The chance of a successful rescue diminish with every second you are in the water and emergency services are at least 15 minutes before they can help you,” says Fire Chief Tony Van Dam for the Township of Georgian Bay.