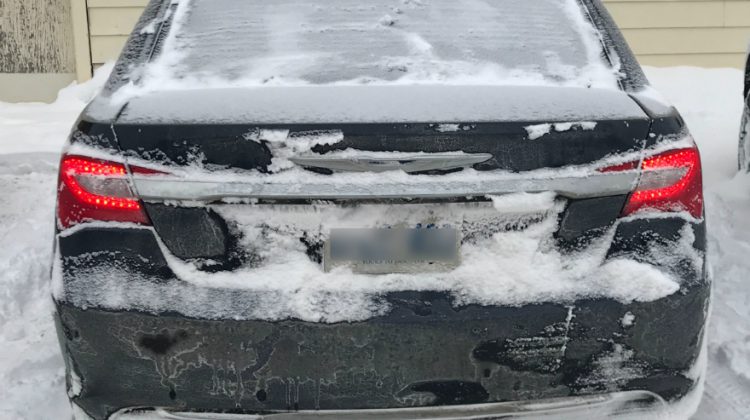 Using your four-way flashers during a storm isn't illegal, but it is not recommended by the OPP. (Doug Crosse Photo)

When should you flash?

With whiteout conditions around the area yesterday,  conversations about when it is appropriate to use your hazard lights came to the forefront.

A number of websites pointed to the fact that anytime you are going considerably below the posted limit due to conditions, one should use the four-way flashers.

But a conversation with Constable Joe Ayotte of the Peterborough OPP confirms that police believe the best practice is to not drive with hazards on.

“There is nothing against the Highway Traffic Act stating that you can’t drive with your four-ways on but we are not recommending it,” says Ayotte. “Four-ways should be used when you are on the side of the road, stopped and are in an emergency situation waiting for a tow truck.”

The logic is your turn indicators do not work once the four-ways are going, so other drivers cannot predict what lane you are going to be in.

“People can’t tell where you are going,” he says.

Most drivers have seen tractor-trailers merging onto highways or on inclines use their four-way flashers because they are driving at much slower than the posted limit.

Ayotte, who was at a training course said it even created a conversation among colleagues, who all offered opinions.

“I clarified with some of our highway safety division guys and there was even a little bit of a debate between us so that’s what we came up with,” he offers.

Some people who were participating in online conversations on My Muskoka Now’s Facebook page referenced the Ontario Driver’s Handbook, which in part indicates that using hazards anywhere but when a vehicle is stopped or broken down should be avoided.

As Ayotte points out, “Your turn signals are being used by your four-way flashers  most times so people can’t tell if you are changing lanes if you are turning at all, so those are Highway Traffic Act infractions.”

Across the country, only four provinces ban the use of four-way flashers while driving. The laws in New Brunswick, Prince Edward Island, Quebec, and Saskatchewan state that hazard lights should only be used in emergency situations where a vehicle has stopped on or beside a roadway. PEI states, “Hazard lights may not be used on a highway when a vehicle is moving.”

Saskatchewan gets the most specific, citing, “Hazard lights may not be used unless a vehicle is coming to a stop or is standing on a highway, it is necessary to do so for the safe operation of the vehicle, or the vehicle presents a hazard to other vehicles on the highway.”

The remaining provinces and territories all say it is either not against the law, such as Ontario, or recommends the use of four-way flashers.

In the North-West Territories, the law states,  “A vehicle that is travelling at less than 40 km/h, owing to vehicle impairment, must have its hazard lights activated.”