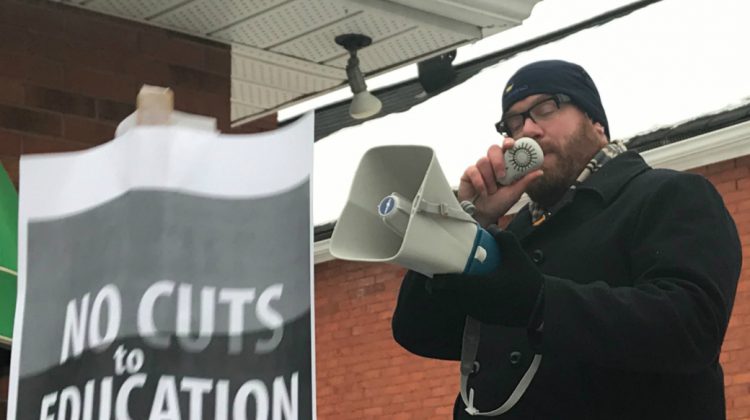 That’s how President of the Ontario Secondary School Teachers’ Federation for District 15, Colin Matthew refers to announced cuts to the education budget.

“You can’t interpret it as anything but an all-out attack on secondary education particularly but on public education, as we know it,” says Matthew.

He said when he heard the news of how large the cuts were going to be he was shocked.

“I can tell you if my jaw could have hit the table it would have last Friday when (Education Minister Lisa Thompson) made the announcement,” he says.

Matthew says the cuts will have quite a different effect on students in the area.

“It impacts Trillium Lakelands and Muskoka very differently than it impacts the City of Toronto or somewhere where the student populations are more dense,” he explains. “When they talk about averages they’re really not talking about any classes that exist. They’re talking about average class sizes which really just represent funding levels. Class sizes are negotiated in collective agreements.”

Matthew’s fear is the funding cuts will lead to school closures in the Trillium board.

“I can’t imagine how Trillium Lakelands could achieve these ratios without closing at least one high school,” he contends. He has organized a meeting with Parry Sound-Muskoka MPP Norm Miller for next Friday (March 29th) to lay his case out for different formulas for the board.

“It’s my hope that Mr. Miller will be sensitive to the needs of our small communities and understand,” Matthew says. But he does believe Miller will have to make a choice between the party and his constituency.

“I’ll say he can’t do both at once and so he is going to be forced to pick,” he says. “And that’s part of the point of this meeting is to help to provide him with some information and to ask him some questions. Mr. Miller is very interested in skills education in Muskoka.”

Matthew says in order for the government to balance the budget it should be done through increasing revenue and not budget cuts.

“My personal leaning is towards corporate taxes,” he explains. “We see corporate profits at all-time highs. But there are lots of solutions and we could let economists debate the different ideologies beyond those taxes.”