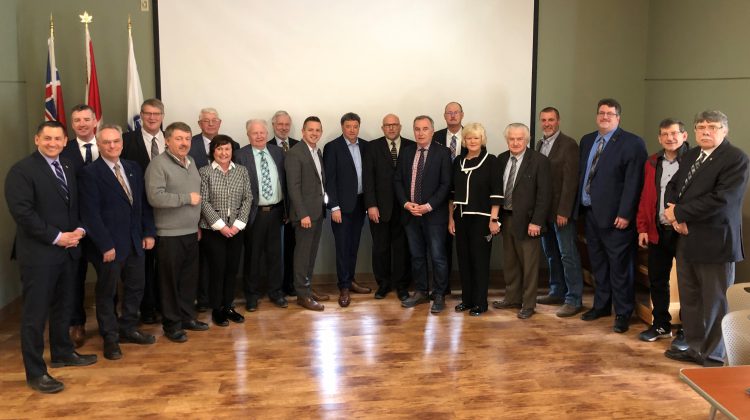 Members of EOWC, EORN and the Members of Parliament (Photo taken from the City of Kawartha Lakes' website)

Internet and cellphone coverage is on the minds of politicians.

The meeting in Kingston featured Minden Hills Mayor Brent Devolin and Haliburton-Kawartha Lakes-Brock MP Jamie Schmale. Schmale has been an advocate for EORN and broadband coverage for a while, and in a previous interview with MyHaliburtonNow.com he shared concerns over the federal budget having broadband expansion but it was an idea that was presented to them years before its inclusion in the budget.

The federal budget includes a $2.7-billion investment for rural and northern broadband expansion, with the objective of connecting all Canadians to high-speed internet by 2030

Andy Letham, the Chair of the Warden’s Caucus, said: “Most of all, we recognize their ongoing commitment to the EOWC’s number-one priority, being the improvement and expansion of the cellular and mobile broadband networks in Eastern Ontario, and we look forward to achieving this goal together in the coming year.”

Although the primary focus of EORN is the expansion of broadband, the meeting also touched on a number of items stemming from last month’s federal budget including a one-time $2.2 billion top-up to the Federal Gas Tax Fund that doubles funding to municipal governments this year, an additional $1 billion to the Federation of Canadian Municipalities (FCM) to help municipalities invest in energy efficiency, including $350 million for grants and loans for large public buildings, and $300 million to improve energy efficiency within sustainable affordable housing, and Funding initiatives to help increase housing affordability, including the expansion of the Rental Housing Construction Finance Incentive to provide low interest loans for affordable rental construction projects.

The meeting of the Eastern Ontario Wardens and the MPs is an event that happens yearly.