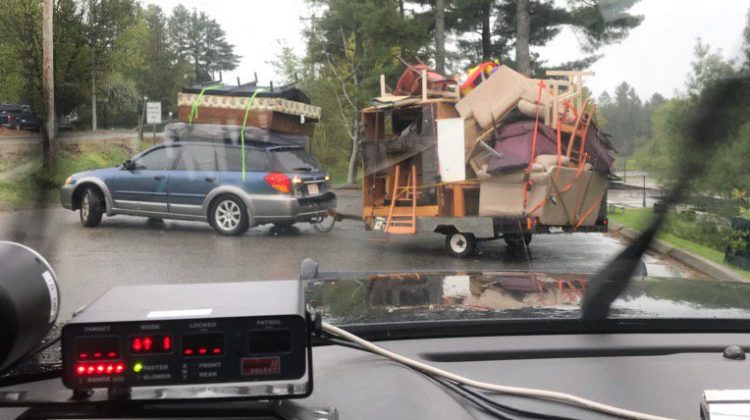 A photo of the overburdened car on June 4th, 2019. Supplied by OPP Central.

HUNTSVILLE, ON- The driver of a heavily loaded Subaru won’t be trying to carry his house on his car anymore.

On Tuesday, a heavily burdened Subaru was stopped within Huntsville by the local OPP.

The vehicle had been hauling what appeared to be furniture and other home goods, tied down with multiple straps and precariously balanced on a small trailer. A mattress and bed frame were also tied to the vehicle’s roof.

A photo of the vehicle being stopped was shared out by the detachment’s commander, John–Paul Graham.

“Are you kidding!!” wrote Graham.

“Think about the risk to others before you hit the road. Great work by OPP in Huntsville!”

According to Graham, the driver of the vehicle was a 50 year old man from the Barrie area, who had been heading up to Muskoka to settle down. He was stopped by police near the Brunel locks around 6:30 p.m. and pulled into the parking lot at the locks.

He then unpacked his vehicle with the help of a friend he contacted, and safely got everything he had been carrying to where he was headed. However, he is facing around $500 in fines over the way he had packed his possessions, as the capacity of the trailer he had been using was exceeded.

Graham said that the man expressed remorse about his decision to pile up the trailer, and acknowledged the danger of what he had done. Officers don’t believe he will make the same decision in the future.

Graham also said that it didn’t appear as though the man had lost any of his property while traveling to the area, and there had been no calls to police about the vehicle until the officer in Huntsville stopped the car.

He ended by stating that if anyone sees anything they believe to be dangerous on the roads, they should contact police.