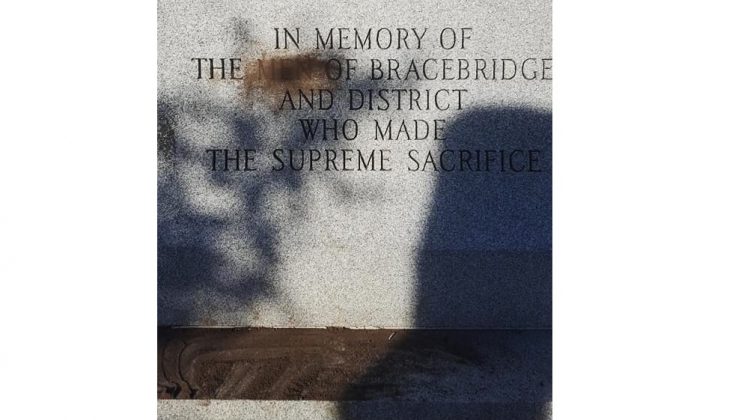 The dirt at the cenotaph in Bracebridge on June 8th, 2019. Image courtesy of Matt.

BRACEBRIDGE, ON- The war memorial in Bracebridge appears to have been targeted by a vandal last weekend.

In a set of photos shared to a local Facebook page on the morning of June 8th, a man named Matt pointed out what appeared to be dirt rubbed across the wording of the cenotaph base.

“In Memory Of The Men Of Bracebridge and District Who Made The Supreme Sacrifice” is what is written across the bottom of the memorial. The dirt had been rubbed across the “Men”.

Matt shared the photos with a simple statement of “Why?”, and when contacted by the MyMuskokaNow.com newsroom he stated he had cleaned off the dirt after taking the picture.

He declined to provide his last name.

The MyMuskokaNow.com newsroom also spoke with William Drysdale, a longtime resident of Bracebridge who served with the navy as a radar and radio technician during World War II. 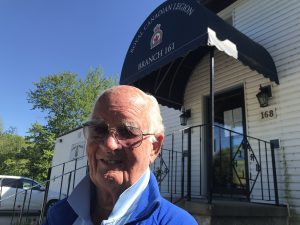 “I’m very disappointed to hear that (about the vandalism), but you can expect anything these days,” said Drysdale.

“It’s a weird sort of thing. I’ve seen some fairly severe reactions against various things, but generally these people are not well, mentally disturbed, and I’m wondering if that’s the problem, with this one that’s done it. And I hope that’s the problem, but you don’t know.”

As for what he would do with whoever was responsible, Drysdale indicated he would try to “straighten them out”.

“But I don’t know. Drugs and all this, they’re so complicated now, it’s almost impossible to tell what the real problem is.”

There were no other reports of vandalism to the memorial from the weekend.