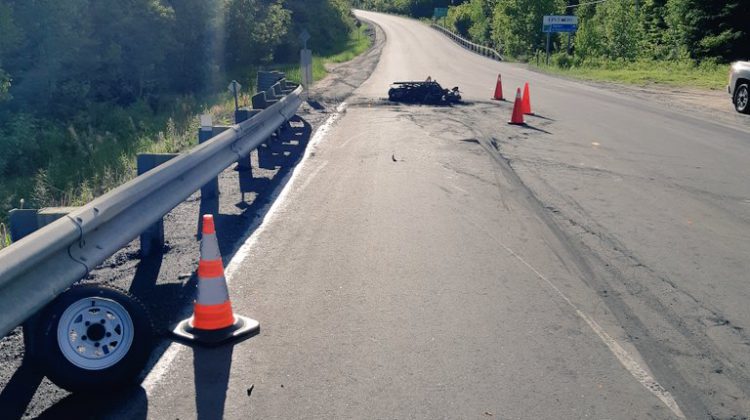 The motorcycle involved in the collision on Highway 118 (photo provided by the O.P.P.)

HIGHLANDS EAST, ON – Two people were taken to the hospital in Bancroft following a motorcycle collision.

Sunday afternoon, emergency services from Bancroft and the Haliburton Highlands responded to a collision on Highway 118 just north of Thunderbird Road.

According to the Bancroft O.P.P., the five services to respond found a motorcycle had been destroyed by a fire, and the driver of the bike was in life-threatening condition. The passenger on the bike also suffered injuries, but their condition was non-life-threatening.

Both the driver and the passenger were taken to the hospital in Bancroft. The driver was later taken by ORNGE AIR to another hospital.

The O.P.P. say the road was closed for upwards of 10 hours as the OPP Technical Collision Investigators tried to figure out what had happened.

O.P.P. says the cause of the crash is still under investigation and more information will come out as the investigation continues.