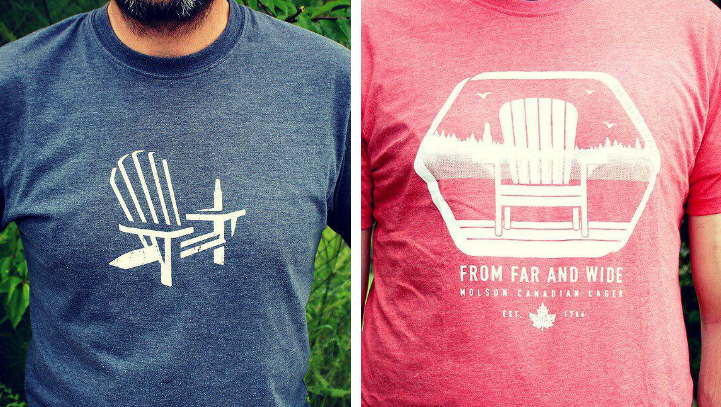 Muskoka Brewery (left t-shirt) is suing Molson Coors (right) over the use of the Muskoka chair logo and the brand identity it has with its customers. (Muskoka Brewery Facebook Images)

BRACEBRIDGE, ON – Muskoka Brewery has launched a lawsuit against Molson Coors Canada and Molson Canada over a t-shirt promotion.

It is all about the use of the iconic Muskoka chair that appears in Muskoka Brewery’s logo.

“Muskoka Brewery asserts that its iconic chair logo is highly recognizable and has become synonymous for all the brewery stands for,” the Bracebridge-based brewery said in a press release.

It goes on to state, “On or about June 22, 2019, Molson Coors Canada and Molson Canada 2005 launched a campaign for a free Muskoka chair t-shirt in cases of Molson Canadian lager using an image that is alleged to infringe the Muskoka Brewery’s trademarks.”

Muskoka Brewery President Todd Lewin said they took action because they need to protect what they have developed in terms of product and brand image in the area.

“We are proud of what we have built here in Muskoka and we need to protect what is ours,” said Lewin. “Our beer triggers real memories of enjoying a local brew sitting in a Muskoka chair on the dock. We don’t want beer drinkers to be confused on what beer they are buying and that we are somehow associated with a big multinational brewery.”

The statement goes on to state, “Muskoka Brewery believes that the chair trademarks not only represent Muskoka Brewery beer itself; they represent the people who make the beer and the community that has proudly supported the brewery for the past 23 years.”

We are interested in what you think about this case. Do you think the two logos are similar and is Muskoka Brewery right to launch a challenge against Molson Coors?

Drop us a line on Facebook and let us know what you think.