Be aware of the Stones effect when travelling today 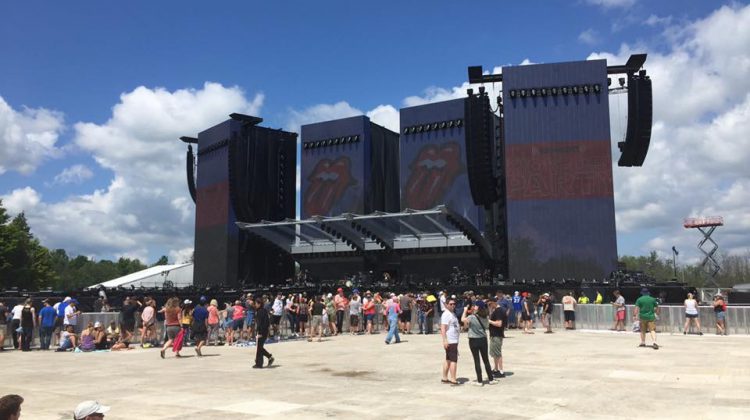 It is being called the Stones effect.

That is anything that is changing life from its normal pattern because of the massive concert being held at the Burl’s Creek Event Grounds in Oro Medonte.

Around 70,000 fans of the world famous band are descending on the area for the hours long festival style event culminating with the Stones hitting the stage around 8:45pm.

With a million watts of sound, video towers topping 80 metres in height, and music from multiple acts, it will be a show to behold.

While the majority of fans are arriving from south of the event area, taking in the Greater Toronto Area, motels in Muskoka seem to be enjoying a net benefit for concert goers.

Kashul Shah, manager of the Quality Inn in Bracebridge said he had plenty of rooms available Friday night, but was nearly sold out for Saturday night.

“Most of the bookings are from the city,” he noted. “Mississauga, Toronto, Brampton.”

He does say a holiday weekend in Muskoka will always be busier than normal.

Esther Kim of the Pinedale Inn in Gravenhurst said they were sold out, but was not sure if it was concert goers or visitors to Muskoka that were booking the rooms.

The biggest consideration for people not attending the concert is potential backups as thousands of cars wait to enter the event grounds parking lots and campgrounds.

There could be a very long backlog onto the highway as over 30,000 vehicles try and find a place to park. Burl’s Creek parking has space for up to 33,000 vehicles. A spot will cost you $50 for the day.

Security is tight at the show with people being urged to use clear plastic totes to carry belongings. Knapsacks are not allowed.

It is also a cashless event, with all purchases being processed by credit card or debit. There are no ATMs on site.

This concert is just the second of 17 on the Stones’ ‘No Filter’  North American tour. Many are saying this could be the final Canadian concert date by the decades old super group.