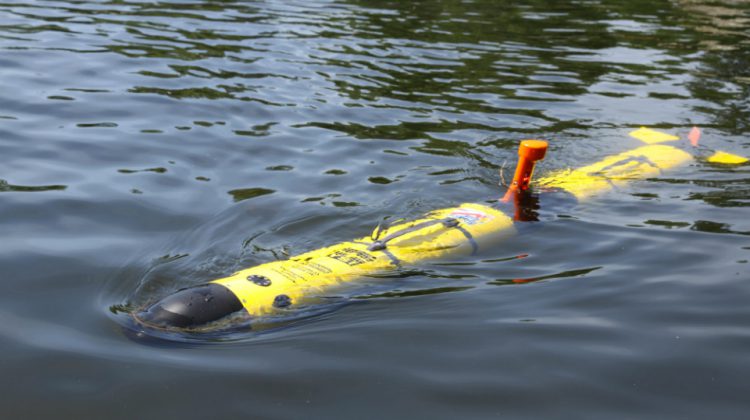 HONEY HARBOUR, ON – A key piece of underwater research equipment has been successfully launched in Georgian Bay.

It happened at the government dock in Honey Harbour on July 3rd.

The environmental group Georgian Bay Forever partnered with the Universities of Western Ontario, Wilfred Laurier and Waterloo to both pay for and conduct research with the first Canadian Autonomous Underwater Vehicle (AUV). 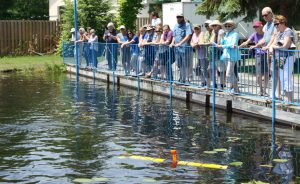 Spectators at the dock in Honey Harbour watch the maiden voyage of the AUV. (Image provided by Georgian Bay Forever.)

David Sweetnam is the executive director of Georgian Bay Forever.  He said being able to explore Georgian Bay below the surface is vitally important to understanding its ecosystem health. But the other interest is to map the lake bed.

“An actual computer-simulated model of the lake bed itself,” he identified as one of the goals. “Those are important when we start looking at impacts of water level changes due to climate.”

The rover is similar to a drone that is flown in the air but instead can remotely explore deep parts of the lake system, taking samples, temperature readings and providing a side-scan sonar map of the lake bed. Its maximum operational depth is 100 metres.

Sweetnam explains that having the simulations of Georgian Bay allows researchers to experiment with different scenarios when it comes to water level management.

“If you have those computer models you can play around with what happens at different water levels,” he explained. “When is flooding going to occur, when are wetlands going to be stranded and high and dry?”

He says the AUV can do water quality testing.

Another system on board that viewers of television weather forecasts would be familiar with is a Doppler radar system. Instead of tracking clouds and measuring water content, this radar tracks the underwater flow of currents.

From a usability perspective this is a plug-and-play piece of equipment. It can be launched from a dock by one person, run night or day underwater for 8-10 hours, and return to a rendezvous point for pick-up.

It will do a number of missions over the course of the summer but can also be used in winter under the ice.