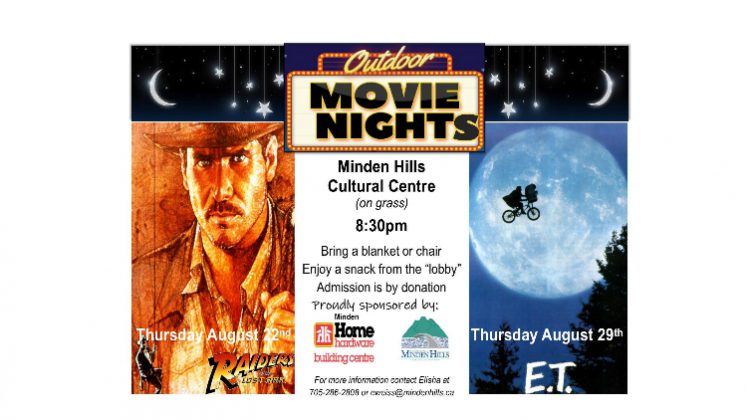 People can catch movies under the night sky at the Minden Hills Cultural Centre August 22nd and 29th. (Supplied Image)

MINDEN HILLS, ON – Summer is a time for the young and the old to learn from each other often in a relaxed environment.

And so it will be as the Minden Hills Cultural Centre presents a pair of outdoor movie nights on Thursday, August 22nd and 29th.

A couple of Steven Speilberg classics are on offer with Harrison Ford starring in the Indiana Jones classic, Raiders of the Lost Ark on the 22nd.

E.T. the Extra-Terrestrial is on the second week, telling the story of Elliott and his desire to help a homesick alien.

Admission is by donation according to the Community Development Coordinator Elisha Weiss. She says the movies were chosen as a nostalgic throwback for older patrons, and possibly a movie that would be well received and seen for the first time by younger guests.

It is the second year of the outdoor movie night series. Weiss is hoping that with the success of this coming event that they might increase the frequency to a weekly showing during the month of August.

You can bring your own snacks but a concession stand is going to be available for limited treats.

You need to bring your own chairs or blankets.

Raiders of the Lost Ark