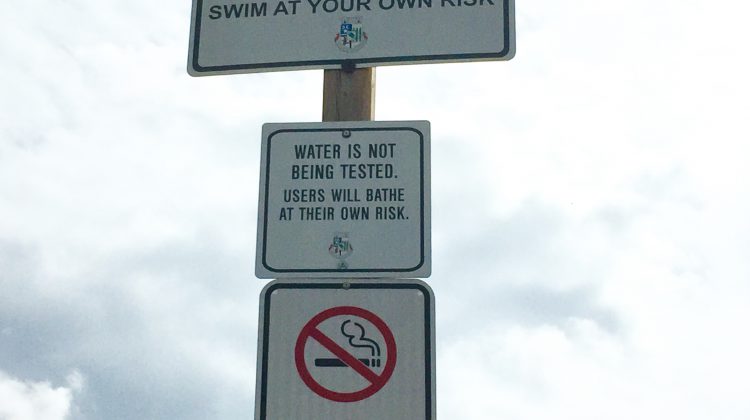 A photo of the sign posted at Rotary Beach (photo taken by Phil McCabe, MyHaliburtonNow.com staff)

HALIBURTON, ON – Although it is open for public use, the health unit does not encourage using Rotary Beach for swimming.

The Haliburton, Kawartha, Pine Ridge District Health Unit tells the MyHaliburtonNow.com newsroom that swimming at the Haliburton beach is not advised.

MyHaliburtonNow.com was in contact with the health unit after receiving reports of an individual contracting a bacterial illness following a swim at the beach, and health unit communications officer Bill Eekhof says the health unit does not test those waters and hasn’t for years.

Eekhof explained while the health unit included the beach in its weekly testing in the past, the results found that it had high bacteria counts on an on-going basis.

He goes on to say the results were much higher than the ‘safe’ levels that are outlined by the Ontario government’s Beach Management Protocol.

Because of that, the health unit elected to stop testing there three years ago. Eekhof says the intention behind that was continuing to list that beach among their list of public beaches might encourage people to use the beach “which they should not.”

It should be noted the beach does, in fact, have a sign posted there saying “Water is not being tested, users will bathe at their own risk”.

With that said, Eekhof says the health unit has launched a pilot project to start testing that beach again. That project is going to continue through the summer to see if HKPR will add that beach back onto the list of those tested every week.

Eekhof says there is always a risk when swimming lake water, but there are things to look out for if someone is wanting to swim. Typically 48 hours after a rainfall, bacteria counts in the water tend to be high.

As well, high winds and wave activity can drive up bacteria counts.

Another warning sign to look for is a high number of birds like geese or seagulls nesting near the beach. Their fecal matter can get into the water and again drive up the bacteria counts.

Algae, floating debris, oil, discoloured water, bad odours and excessive weed growth are other potential signs that the beach may be unsafe for swimming. Prolonged hot weather can promote the growth of bacteria in the water, as can the actual water temperature.

Based on the fact high bacteria levels can cause throat and sinus issues, the health unit encourages parents and guardians to make sure kids are not putting their heads below the water.

HKPR has 18 other beaches across Haliburton County that are currently open and safe for swimming.