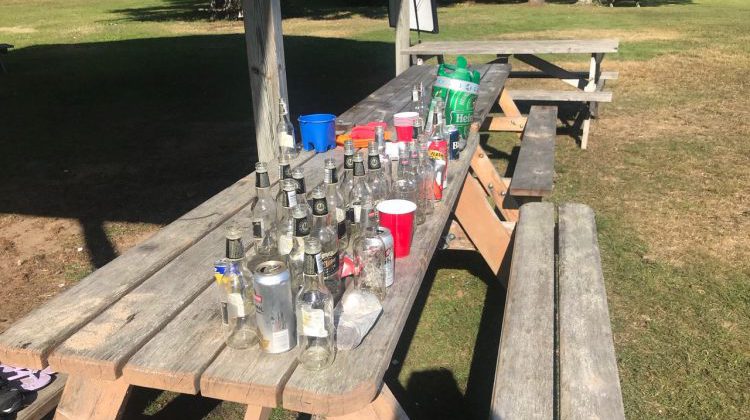 DYSART ET AL, ON – A lake association is hoping for more respect in the future.

With the long weekend come and gone, the Haliburton Lake Cottagers Association (HCLA) says that a party Sunday into holiday Monday resulted in damage to the public beach there.

According to HLCA, there was a party at the beach Sunday night that went until 3:00 am. Because of that party, there were several things that got damaged.

In a mass email and update sent out by the HLCA, the association says that picnic tables, their signage, and vegetation fencing were all the victims of the party.

Based on photos provided by the association, the table was vandalized with a drawing on it. There was also a table left upright leaning against a tree.

The fencing appeared to be trampled on or tripped over and left in disrepair.

Also left behind following the party were empty bottles, cups, cans, and even a mini keg.

HLCA says that friends and neighbours banded together and cleaned up the public beach before the swimming lessons there started that day.

“Please be respectful of such a beautiful park by coaching family, friends and acquaintances of the importance of this asset to our community,” said the group.

“In addition to not hesitate in contacting the OPP in extreme situations.”