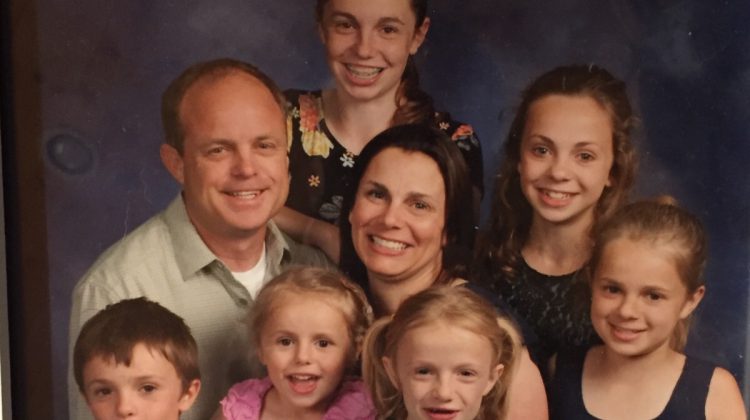 This family photo shows Jeff and Kathy Mavor with their children. Jeff was killed in a floatplane crash; his wife and children survived.

ORILLIA, ON- Donations are pouring in for the family of Jeff Mavor after a tragic plane crash this week.

The crash happened at Upper Raft Lake in the Lake of Bays on Monday morning.

A CH-146 Griffon helicopter part of the 424 Transport and Rescue Squadron out of Trenton was dispatched around 10:00am to the site which is located around 30 kilometres northeast of Arrowhead Provincial Park.

The helicopter transferred the six survivors to Muskoka Airport in Gravenhurst where the injured were taken to hospital by EMS.

44 year old Mavor of Ramara Township was piloting the plane at the time of the incident, and police confirmed he was the person who passed away in the crash on Wednesday.

A GoFundMe launched by a family friend describes Mavor as a loving father, husband, son, brother and friend, and indicated that he is the owner and operator of Lake Country Airways, as well as the manager of Orillia Aviation.

“Jeff was very much involved with his church community and cherished by anyone who crossed paths with him,” read the GoFundMe.

“He was kind, soft spoken and a hard worker. Jeff was known to always have a project on the go but never hesitated to stop and help a friend. But If you knew Jeff it was family first! He adored his wife and children and always had one or two of the kids tagging along.”

It also indicates that Mavor was flying his family at the time, with his wife Kathy, five of their kids, and their family dog, Pal. They had flown on Sunday, packing up sandwiches and heading to the family cabin, when the accident took place.

“Due to Jeff’s heroic act all five kids and Kathy got out with minor scraps and bruises,” read the GoFundMe.

“In the process sadly him and their life long dog, Pal did not make it. Jeff leaves behind his beautiful wife Kathy and his six wonderful children who will dearly miss him and never forget their Hero! They will remember as Dad.”

A funeral service will be held at the First Baptist Church, 265 Coldwater Rd. W. in Orillia, on Wednesday, Aug. 14 at 1 p.m. A reception and time of visitation will follow.

A link to the GoFundMe can be found here: https://www.gofundme.com/f/hero-dad-amp-husband-saves-family-in-plane-crash