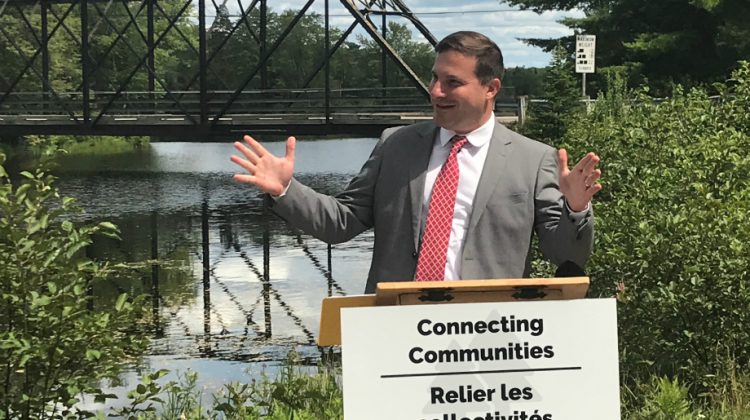 An announcement in Bracebridge near the 94-year-old Black Bridge confirmed that money for rural Ontario was being spent and would help upgrade ageing roads, bridges and water and sewage systems.Marco Mendicino, Parliamentary Secretary to the Honourable François-Philippe Champagne, Minister of Infrastructure and Communities, on behalf of the Honourable Bernadette Jordan, Minister of Rural Economic Development, and Graydon Smith, Mayor of the Town of Bracebridge announced funding to improve a local road and replace four bridges in the Districts of Muskoka, Parry Sound and the County of Haliburton.

“Building safe and efficient roads allow Canadians to spend less time in traffic on their way to work and more quality time with their families. Thanks to these road improvements and bridge replacements, Muskoka residents will be able to get to their destinations quickly and safely, thus improving their quality of life,” remarked Mendicino.

In Bracebridge, the replacement of Black Bridge with a new single-lane structure with new safety barriers will improve traffic and road conditions for users of the bridge for years to come. The new Black Bridge will also feature a 1-kilometre pedestrian walkway, allowing residents and visitors to cross the bridge by foot.

“The Town of Bracebridge greatly appreciates the approval of funding for the Black Bridge Replacement Project through the Investing in Canada Infrastructure Program,” said Smith. “The Black Bridge serves as a key transportation link for both permanent and seasonal residents of Bracebridge.

“The funding for replacement of the ageing bridge will help to ensure that people, goods and services are able to safely get where they need to go. The Investing in Canada Infrastructure Plan funding supports implementation of the Town’s comprehensive asset management plan and helps ensure the effective use of taxpayer dollars.”

Other projects include the replacement of Snider’s Bay Bridge in Gravenhurst, the Etwell Bridge in Huntsville, and the Hawk Lake Road Bridge in the County of Haliburton. In addition, in the Village of Burk’s Falls, important road improvements will be completed on Yonge Street that will create a safer experience for pedestrians, cyclists and drivers using the roadway.

The Government of Canada is investing more than $4.4 million in the five projects through the Rural and Northern Communities Infrastructure Stream of the Investing in Canada infrastructure plan. The province and municipalities are responsible for the remainder of the project costs.