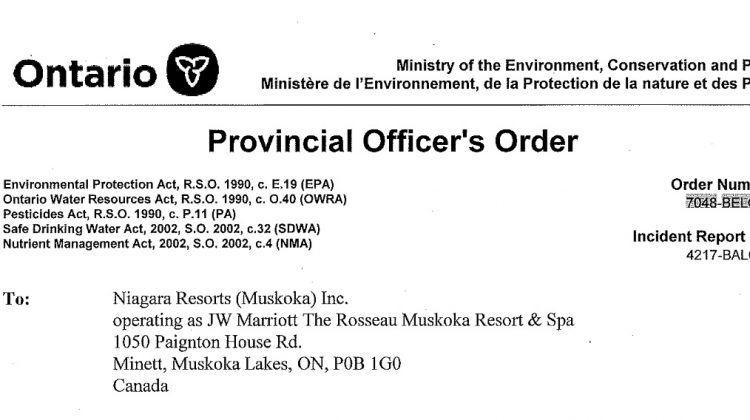 The top end of the provincial order.

MINETT, ON- A major Muskoka resort is working on compliance after allegedly spilling sewage this summer.

According to an order from the Ontario environment ministry issued to the JW Marriot Muskoka Resort and Spa in Minett on August 2nd, there have been multiple issues with the resort’s sewage system since 2015.

Those issues have included what are described as several raw sewage spills in July of 2015, two in July of 2018, and two this year on June 30th and July 1st.

The order details those spills, stating that the resort’s sewage works experienced increased volume and was overwhelmed, which ended in a spill of untreated material down to the shore of Lake Rosseau.

“Historically, JW Marriott staff have ignored Provincial Officer(s) repeated requests to provide information and/or take actions necessary regarding the Sewage Works in order to protect human health and the environment,” read the order.

“The current operations of the Sewage Works as well as the excessive volumes of sewage that has been overwhelming the treatment system has placed the local environment at risk as well as a risk of possible human health effects due to the potential exposure to raw sewage around the plant at the STP Property in overflow situations as well as the raw and/or inadequately treated sewage being discharged into the Pond Property.”

The order states that the recent spills ended up near the area’s marina, which could have exposed people and their pets swimming or walking in the area.

“In addition, the raw sewage at times, and partially treated sewage on an on-going basis, is being discharged to the pond and golfers could potentially be exposed to the partial or untreated sewage which could result in adverse health effects and exposure to pathogens and viruses, etc,” reads the order.

The order states that management at the resort have been involved during the last few weeks, and are taking steps to ensure risk management measures are being taken.

The order requires the operator of the sewage plant to be on-site daily, weekly reports to the provincial environment ministry on operations, and the hiring of a engineering consultant to review the facility.

According to Bill Morgan, the resorts director of finance, operator Clearford ASI is coming in and doing daily checks, examining sewage levels and the purity of what is coming in and going out. Reports on that data are being sent to the provincial environment ministry each Tuesday.

The assessment of the plant, according to Morgan, is going to be done before September 30th. No major changes to the plant are planned at this time.

“Nothing needs to be re-engineered, just ongoing maintenance and upkeep and make sure that we’re compliant with the MOE (Ministry of Environment), and the requirements per the MOE standards, which we are doing,” said Morgan.

Morgan also stated that the sewage spills mentioned in the report from this year didn’t actually end up in Lake Rosseau, instead ending up at a highly vegetated pool at the resort’s golf course. He didn’t know if the spilled material from previous years had ended up in different locations.

He said the environment ministry has been pleased with the actions taken by the resort.

“We’re working very harmoniously with them, and they seem to be very happy with that.”

He indicated that ownership of the resort takes any issues with sewage “very seriously.”

“The resort and the ownership are completely in compliance, and we take it very seriously about safe operation of our sewage treatment plant, we take very seriously the safety of our guests and the staff, and protecting the environment,” said Morgan.

Overall, he emphasized that the resort sewage system is safe.

“There is no situation where it is not safe,” said Morgan.