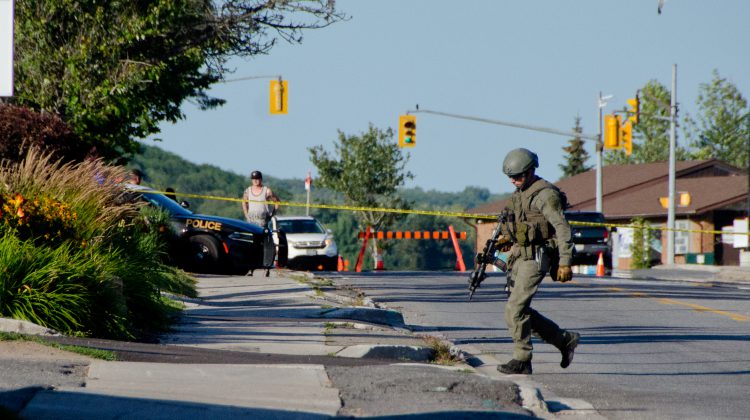 A tactical response officer returns to their vehicle after the end of a standoff in Huntsville on August 19th, 2019. Photo by James Wood/MyMuskokaNow.com staff.

HUNTSVILLE, ON- A man in his 30’s is in police custody after a standoff in Huntsville today.

According to John-Paul Graham, the detachment commander of the Huntsville OPP, officers first received calls about a man firing a handgun in the air along King William Street around 3:30 p.m. today.

The man had been firing near a residence near the intersection of Cliff Avenue with King William, across the street from the McDonalds along the route.

The man is believed to have been suffering from a mental episode at the time, and the firearm was similar to the model in use by police, according to witnesses who spoke to police.

Graham stated that police felt the need to isolate the incident, prompting the closing-down of King William in both directions and the evacuation of multiple businesses, including the McDonald’s which was full of customers. Patrons were told to leave out the side entrances, and the drive-through lane traffic was turned around.

Officers staged in the restaurant’s back parking lot for the majority of the call, with Emergency Response Team tactical officers arriving in force around 6:00 p.m.

Graham described the response as measured, and suited to the individual in question.

“He has had some involvement with police, and some violent episodes with police, so for us to have this measured response was an accurate assessment of the danger that we could have out ourselves into with this individual, knowing that he had a firearm in his possession,” said Graham.

Shortly after the full tactical team arrived, the man was taken into custody peacefully. The call was finished around 6:30 p.m.

Graham indicated that the residence where it took place was not the man’s, rather it was just the place where it happened. A woman was also present in the home throughout the call, but Graham told reporters that it wasn’t a hostage-type situation.

He was thankful for the quick response, and thanked officers and the public for their assistance in handling the situation.

“Someone with a firearm would be able to cause a lot of carnage if they wanted to take somebody’s life, or their own life, at the time of the incident, especially if they’re dealing with mental challenges of their own,” said Graham.

The man, who is a resident of Huntsville, remains in custody, and will likely be facing a variety of weapons charges. The investigation to determine charges remains ongoing at this time.