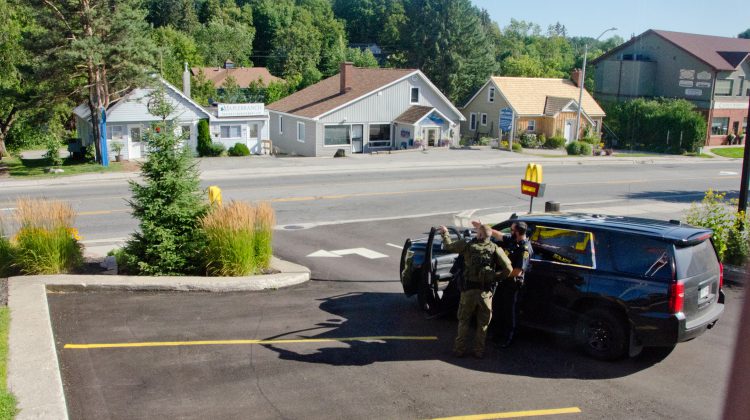 A tactical response officer speaks to a member of the Huntsville OPP during a standoff in Huntsville on August 19th, 2019. Photo by James Wood/MyMuskokaNow.com staff.

HUNTSVILLE, ON- Police have found no actual weapons after yesterday’s standoff in Huntsville.

According to a new statement issued by the Huntsville OPP, the 33-year-old man arrested after yesterday’s shutdown of King William Street is not facing any charges.

The details on yesterday’s incident as they were originally stated by police can be found here: https://www.mymuskokanow.com/93568/93568/

Police originally indicated that officers first received calls about a man firing a handgun in the air along King William Street around 3:30 p.m. on Monday.

The man was believed to have been firing near a residence near the intersection of Cliff Avenue with King William, across the street from the McDonalds along the route.

Officers shut down the area out of concern for public safety.

A Critical Incident Commander, a Crisis Negotiation Team, the Central Region Emergency Response Team (ERT) and OPP Tactics and Rescue Unit (TRU) were staging in the area when the man exited a residence.

Shortly before 6:30 p.m. he was taken into custody.

Police have seized two replica airsoft guns and a bear-banger, which is similar to a firecracker, commonly used to startle or distract bears. The device has been determined to be the noise that witnesses thought was gunfire.

“As a result, investigators will not be filing further Criminal charges in relation to this incident,” read the statement from the detachment.

“The male remained in police custody until late last night due to outstanding arrest warrants from previous offences.”