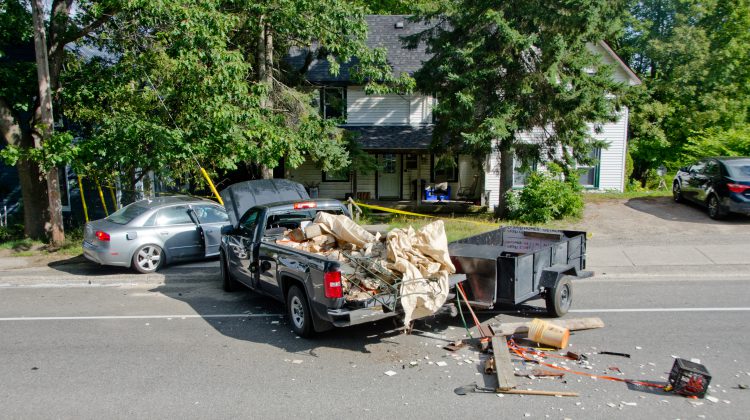 A photo of the crash scene along Main Street West in Huntsville on August 23rd, 2019. Photo by James Wood/MyMuskokaNow.com staff

HUNTSVILLE, ON- Two people are in hospital after allegedly fleeing from a check stop in Huntsville early this morning.

According to the Huntsville OPP, members from the detachment had set up a RIDE check stop on Main Street in Huntsville shortly before 2:00 a.m.

Around that time, a vehicle drove through and failed to stop for police. It was located abandoned shortly afterwards, after getting involved in a collision with a parked pickup truck and trailer.

The occupants had fled the scene, but were located nearby by police and taken to hospital for treatment of serious injuries.

32 year old Bracebridge resident Tyler Shakespeare was arrested and charged with the following:

A 24 year old female passenger who is a resident of Huntsville remains in hospital with serious injuries.

The OPP has notified the province’s Special Investigations Unit (SIU) and they have invoked their mandate.

As a result, the OPP will not be able to provide any further information.

Investigators from the unit arrived at the scene this morning.

The incident occurred along Main Street West, close to the intersection with Tait Street. The road is closed in both directions around the crash scene.

Main Street is closed at Tait in the West and Ferguson Road in the East, and will be closed until further notice.