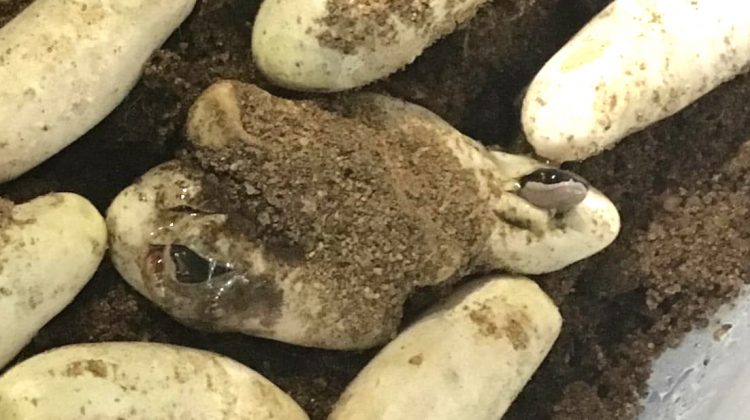 The head of a baby northern ring-neck snake peeks out of an egg. (Nick Godard supplied photo)

PORT SYDNEY, ON – A simple cottage renovation job has turned into a reptile rescue in Port Sydney.

Nick Godard was doing some demolition of old stairs ahead of installing new steps when he discovered a clutch of snake eggs a couple of weeks back.

“When I removed some masonry and patio stones there was eggs and a big nest all over the place,” the 30-year-old said. “I would say just over 30, quite a few.” 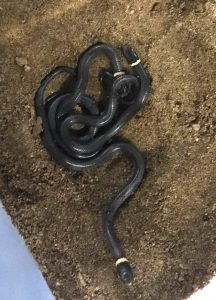 A baby northern ring-neck snake out of the shell. (Nick Godard photo)

Even though he had not seen any snakes on the property he knew he did not want to damage this future generation so he stopped what he was doing and hit the internet for some instant reptile knowledge.

He knew it was something other than a garter snake because they are actually live-bearers of offspring, a rarity in the reptile world.

“So right away I knew this was a different snake,” he said. “It was a northern ring-neck snake.”

Godard did some research on how to properly incubate the eggs and it wasn’t as simple as grabbing them and putting them in a tank.

“You have to be careful not to rotate them in any way,” he said.”Basically how you find them is how you have to orient them the same way.”

After about 10 days noses began to break through the eggs and he was the proud poppa of 15 or so tiny snakes. Others are due any day. Godard, who is the son of Lake of Bays councillor Jacqueline Godard,  said growing up in Muskoka instilled a sense of balance with nature.

“If you’re affecting one creature’s habitat I always feel like it’s your right to try and rectify it any way you can,” he said.

He has not seen any evidence of the mother being around the property but in a video he posted online, shows the first group of baby snakes being returned to the area where they were laid.

“Hopefully I didn’t disturb (the nesting area) too much, but the idea was to let nature run its course,” Godard offered.

Ring-necks are native to central Ontario and not poisonous, eating insects and small reptiles.

Godard hopes other people take a similar approach to nature when coming on situations similar to his.

“Maybe people will think twice before just killing something like this that is harmless,” he said.