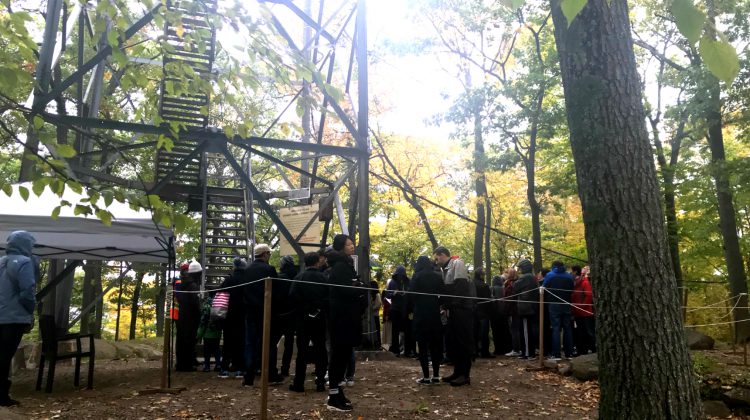 The lineups at the base of the tower take between 25 and 40 minutes before actually climbing the 100 foot tower. (Doug Crosse Photo)

DORSET, ON- Money could be coming to the Dorset Tower in the future.

According to a report from the Minden Times, the council for Algonquin Highlands recently discussed making an application for provincial funding to do some major upgrades to the tower, and the property on which it sits.

The Times reported that the funding application will be made to the Community Culture and Recreation stream of the Investing in Canada Infrastructure Program, which funds projects with a total value of up to $5 million. Costs are shared between the three levels of government.

The possible work at the tower would include roadway improvements, landscaping, and upgrades to the tower structure. The development of other viewpoints on the property would be considered as well.

Algonquin Highlands will hire a consulting/engineering firm to provide cost estimates for the work, with a budget for that service of around $8000.

According to the paper, council will need to approve their application amount by their first meeting in November to meet the funding deadline.