GoFundMe launched to give Haliburton animal rescuer a golden send-off 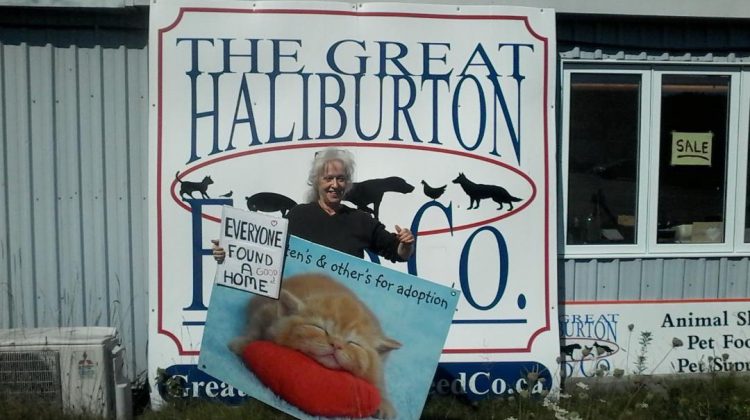 HALIBURTON, ON- Thousands have been raised to help out an animal rescuer retiring in Haliburton.

Celebrity interior designs Colin McAllister and Justin Ryan, who divide their time between Toronto, London, and Glasgow, were the starters of a GoFundMe to help out Haliburton resident Maureen Adams, who owns and operates the Great Haliburton Feed Company.

According to the GoFundMe, a “miracle” has been happening in the village for the past 24 years of the business’s operation.

“Unwanted and abandoned animals (cats, dogs, chickens, rabbits and even donkeys) have been given a second chance thanks to local heroes Maureen Adams and Charles McAleaney,” wrote McAllister, who was named as the organizer of the effort.

“In the couple’s loving hands, the animals have been cared for and rehomed as a ‘not for profit’ side line to The Great Haliburton Feed Co, a pet supply store.   Selflessly, they’ve rehomed literally thousands of animals, without outside funding.   Maureen and Charles always relied on their own – modest – resources, and the generosity of others who adopted the animals they save.”

McAllister states that they know about the operation because the couple’s rescue cats, Beamer and Brutus Small, came to them from the store. Beamer was an abandoned ten month old cat, while Brutus Small was a nine-week old kitten, thrown from a moving truck.

“Finding our beautiful boys, we should tell you, changed our lives, and we’re forever grateful to have them with us,” wrote McAllister.

The business has faced challenges in recent years, with a fire destroying the building in 2014 and the new location almost closing last year. Then Charles unfortunately passed away in early 2019.

“Maureen, by now alone in life, struggled to maintain the business and, with a faltering economy, was recently forced to face retirement,” wrote McAllister.

“Sadly, however, Haliburton’s biggest animal champion was unable to find a buyer and, at the end of September, The Great Haliburton Feed Co. will close its doors for the final time.   After twenty four years of hard work and care, it’s full stop.  The end of an era.  The closing of a chapter.  Without any type of financial return for all the hard work. “

McAllister writes that the community is saddened by the way things have unfolded, with both Maureen and Charles held in high regard by the community.

“We’d like to say goodbye, and thank you, to Maureen, on behalf of all the pets and pet owners who’ve been brought together by her outstanding endeavours,” wrote McAllister.

“As she faces a somewhat financially compromised retirement, we’d like to steer a golden send off to help lessen the blow.  Whether someone whose life was bettered by adopting a pet from Maureen and her late husband Charles, a good Samaritan willing and able to give back to someone who has given so much or simply an animal lover who wants to say ‘thank you’, please join us by making a donation to help bolster this deserving cause.”

The MyHaliburtonNow.com newsroom spoke with Adams for her take on the situation. She said it was “amazing”, and thanked Justin and Colin for their kindness as well as the wider community.

According to Adams, the money will help defray remaining store debt, and help see her through until she gets back on her feet to make her next move.

She also said all the remaining animals who had been at the store have found homes.

“It was such a relief,” said Adams.

As for what she would say to the wider community, she was deeply thankful.

“There are no words that I can say to express how I feel about the support, and the friendship and the kindness of all the people in the community,” said Adams.

“I’m just grateful and humbled. The people in the community are really just wonderful, kind people. Justin and Colin are kind people, and it’s a wonderful thing to be a part of.”

A link to the GoFundMe page can be found here:  https://www.gofundme.com/f/animal-saviour-desperately-needs-your-help?utm_source=facebook&utm_medium=social&utm_campaign=p_cp%20share-sheet&fbclid=IwAR3B_MTlfYZsayjpL76ihI_8-LS2n51HWCc41qKsyBKN_obm_fcWEmLTsn8