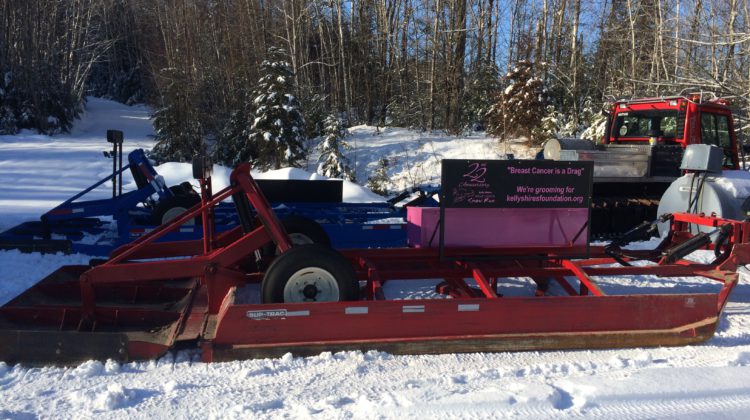 The groomer that will be used along the TOP B103 trail (Photo supplied by: John Enright)

The Haliburton County Snowmobile Association is putting its time on the trails to good use.

For every hour they spend grooming the B103 trail during the upcoming season, they will donate $1 to the Kelly Shires Breast Cancer Foundation. The association’s Vice President John Enright says it’s their busiest trail.  “It’s high visibility,” he says. “That’s why we chose it.” Enright estimates close to 500 hours will be spent on the trail.

The foundation helps women and men handle unforeseen expenses not covered by their health insurance.  The foundation’s mission is to provide financial assistance for patients to make their fight a little less challenging.

Enright says the foundation is “very snowmobile focused.” The foundation does the Kelly Shires Breast Cancer Snow Run every year to raise funds.

“It’s our way of giving back to a great organization who help patients cope with this disease,” Enright says. “We want to make a difference.”

He adds that the idea of doing this on a high-traffic trail is to raise the charity’s profile.

In recognition of the fundraiser, the association has added a pink toolbox to one of their groomers. “Lots will see it,” Enright says.

Enright says this is the first time in the club’s 40-year history they are hosting a fundraiser for a charity.