Ontario at a “dangerous point” in spread of COVID-19, contacts must be reduced 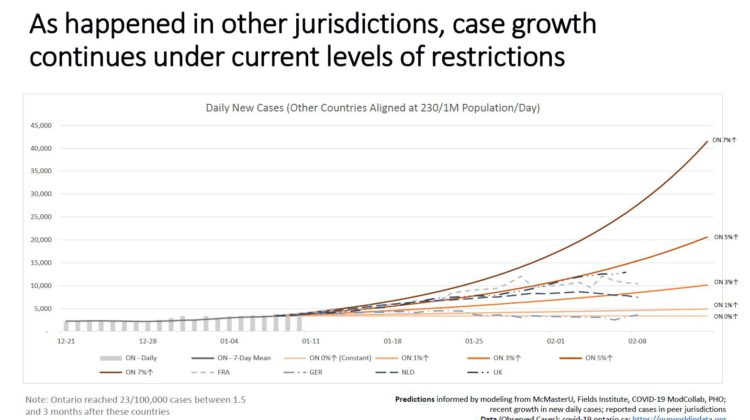 (Supplied by Ontario Ministry of Health)

Ontario is at a “dangerous point” in its fight against the spread of COVID-19.  That from Adalsteinn Brown, the dean of the Dalla Lana School of Public Health at the University of Toronto as he presented new data modelling numbers on Tuesday.

Ontario could see 40,000 new cases of COVID-19 a day by mid-February. That is what new provincial modelling data shows if the rate of growth is at its highest peak of 7-percent.  According to health officials that is where we have already been on the province’s worst days.  Even with slower growth at 3-percent, the data shows daily case counts at 10,000 and at 5-percent slightly over 20,000 new cases a day.  The average daily rate of growth is now somewhere between three and five percent a day.

Brown says if the growth of the virus is not controlled doctors will have to face difficult decisions that “no doctor wants to make”.  He said those choices will affect everyone including heart attack patients, car crash victims, and cancer patients.  He said there will also be hard choices about who gets oxygen and who doesn’t.  The health care system is overloaded with over 400 patients in intensive care with one-quarter of hospitals without any beds and another quarter with only two or three beds available.

The new UK variant of COVID-19 (SARS-CoV-2 (B117)) is in Ontario with another eight new cases discovered in the province in Ontario on Tuesday.  The new variant could drive case counts much higher according to officials, with doubling time for cases that could drop by more than two-thirds.  However, officials say the severity of illness from the new variant does not appear to be worse and current COVID-19 vaccines are “likely still effective.”

Officials say unless Ontarians reduce their contacts drastically the spread of COVID-19 will continue.  While two-thirds of residents are following public health restrictions and are staying home, officials say one-third are not.  Officials warn that case numbers “will not decline until more of the population follows their example.”

Stricter restrictions are expected to be announced by Premier Doug Ford Tuesday afternoon that reports suggest will be tighter restrictions than in the spring, including declaring a second state of emergency and shorter shopping hours for retail stores like supermarkets and pharmacies.