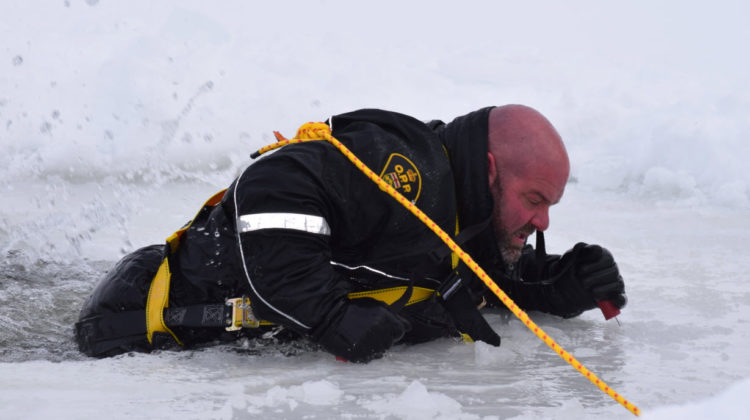 As temperatures across Eastern Ontario warm, members of the OPP gathered last week to snow the public how to survive falling through ice.

OPP Sergeant Annie Collins says they cut a hole in the ice, and had an officer jump in to demonstrate the ‘1-10-1’ rule.

“The first minute is to stop yourself from going into too much of a cold shock, and trying to really keep your breathing under control,” Collins said. “Then you have just over ten minutes to be able to use your fingers, arms, and legs effectively, and then you have one hour before hypothermia could potentially set in.”

Collins says the first jump saw McCaffrey kick his legs, and get out within 30 seconds and then roll away from the hole, and walk back onto the ice he knew was safe.

She adds on the second try, McCaffrey had a bit of a boost thanks to some vital safety equipment.

“He used ice picks, so it was a much more effective way to get out of the hole,” Collins said. “If you have ice picks at hand, that’s one of the key pieces of equipment you should always have if you’re out snowmobiling or out on the ice for whatever reason.”

Collins also says it’s important to wear appropriate winter clothing and never go on the ice alone or at night.

She points to a number of ways you can stay safe for ice-related activities.

“Go to designated areas for ice-skating, maintained by knowledgeable people,” Collins said. “Any type of ice that’s melting in slightly warmer temperatures, don’t even go near it. And if you can, buddy up, and always have someone with you.”