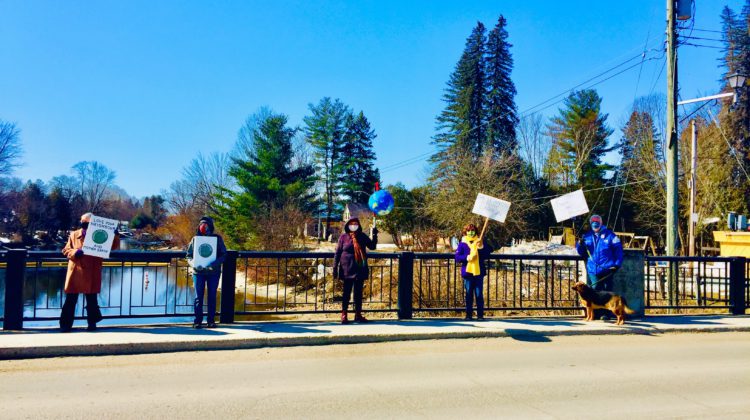 After a short break because of the COVID-19 pandemic, the Concerned Citizens of Haliburton County (CCHC) were in Minden last week to restart its climate strikes.

Last Friday, Bonnie Roe with CHCC says they were limited to a maximum of 25 people because of the pandemic. A total of 12 people ended up attending the strike that was held in front of the Minden River Cone.

The Fridays for Future climate strikes were originally organized by Jürgen Shantz who was a 16-year-old student at Haliburton Highlands Secondary School at the time. “He was very courageous and decided that he was going to do this strike in front of the municipal building in Haliburton,” Roe tells the MyHaliburtonNow.com newsroom. Since then, Roe and CCHC have taken over as the organizers of the event with Shantz now studying at Queens University.

Roe says the message spread quickly two years ago with between 25 and 50 people showing up to their first strike. “The reason he did it was that he said we could all make a difference,” she says. Roe says he would often say that it’s the small things like end up making a big difference. She says you can reduce your use of plastic water bottles or bags, cut down on what you dump at the landfill, or start composting. “Doing all kinds of things that people don’t think are big, but could make a difference,” Roe says.

“Concerned Citizens of Haliburton County started two years ago and this is one of the key issues we identified: climate strikes, making our political government officials accountable, engaging students in different issues and looking at social justice issues,” Roe says. She adds that Mayor Roberts has been “very receptive” of the past strikes, only asking them to make sure they follow the protocols set by local and provincial health officials. “We’re very fortunate that Dysart has been very supportive,” Roe says.

The issue that Roe and CCHC have run into is getting youth involved. She says that these strikes are about them. “We’re trying to figure out how to reach the high school students and to make it relevant to them because this is their future,” she says.

While another strike isn’t planned yet, Roe tells the MyHaliburtonNow.com newsroom that another one will be held this year. She says to get in touch with her if you want to take part in them or work with CCHC. You can email her at info@concernedcitizenshc.ca.