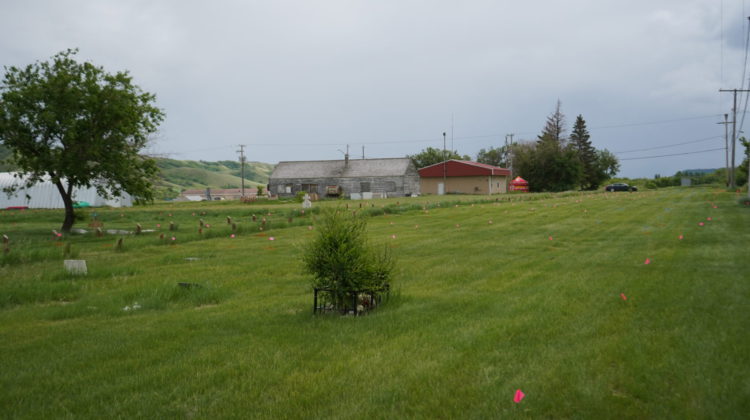 Taken on Friday, June 18th at a community gathering to update community members on the Gravesite Restoration Project. (Photo courtesy of and with permission of Cowessess First Nation)

751 unmarked graves have been discovered at the site of the former Marieval Indian Residential School in Saskatchewan.  The Chief of the Cowessess First Nation made it clear that this was not a mass grave site but rather a cemetery overseen by the Roman Catholic Church.

“The Marieval Residential School gravesite was overseen by the Roman Catholic Church from 1886 to the 1970s. During this time children who attended Marieval and passed were buried at this gravesite. In the 1960s the Catholic Church removed the headstones and today, we have over 600 unmarked graves” says Cowessess Chief Cadmus Delorme. “This is not a mass gravesite; it is unmarked graves. Our end goal is to locate, identify, and put a markdown honouring our loved ones.”

Chief Delorme said the graves may have been marked at one point, but the Catholic Church may have removed them at some point in the 1960s.  Chief Delorme called the removal of the headstones a “criminal offence.” Chief Delorme says they will be treating the site “as a crime scene” and will be working to identify the people in the graves.

He says he would like a monument at the site with all the names on it. Delorme says they cannot say for sure if the graves are all of children, as stories in the community suggest there may also be adults buried there.

The First Nation partnered with Saskatchewan Polytechnic earlier this month to use ground-penetrating radar to find the unmarked graves.  He said the radar had 751 “hits” and that more than one body may be in the discovered graves.  Delorme said the radar has a 10 to 15 percent error rate.

Both Chiefs called on all levels of government to work with all First Nations to find those sites.  Chief Delorme also said Pope Francis, the head of the Roman Catholic Church which ran the Marieval Indian Residential School must apologize, “An apology is one stage of many in the healing journey.”

In May, a burial site of 215 children in an unmarked mass grave was discovered on the grounds of the former Kamloops Indian Residential School.

In a statement, Prime Minister Justin Trudeau said he was deeply saddened by the discovery, “The findings in Marieval and Kamloops are part of a larger tragedy. They are a shameful reminder of the systemic racism, discrimination, and injustice that Indigenous peoples have faced – and continue to face – in this country. And together, we must acknowledge this truth, learn from our past, and walk the shared path of reconciliation, so we can build a better future.”