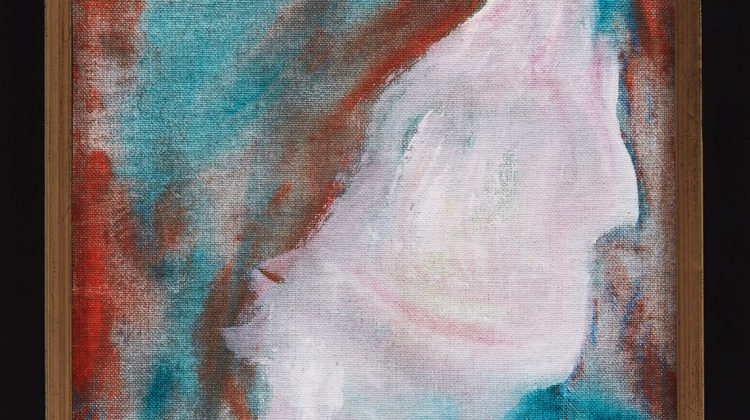 The David Bowie painting found at a landfill in Almaguin has sold for over $100,000 (Photo credit: Cowley Abbott)

A David Bowie painting that was purchased for $5 at the Machar landfill in Almaguin Highlands has sold for $108,120.

Cowley Abbott Fine Art says it’s a record for a painting by the famous musician. The auction ended up drawing just about 50 bids from across Canada and as far as Australia. The painting is from Bowie’s Dead Heads collection, which featured 45 canvas works of art and were painted between 1995 and ’97.

The winning collector was a private collector from the United States.  “It’s the story that always gets attention and for good reason,” President of Cowley Abbott Rob Cowley says “It’s like winning the lottery.”

He adds that the gallery fielded tonnes of calls in the days leading up to the auction. “It’s a phenomenon we call the Hollywood Effect, when there is a famous name attached, or when there is an extraordinary set of circumstances such as rarity or human-interest story behind the artwork,” he says. The auction house sold around 250 works of art today, and Cowley says the Bowie painting was the most popular. “It exceeded the highest price of all the works sold online,” he tells the MyMuskokaNow.com newsroom.

While still uncommon, Cowley says findings like this do happen every so often, which he credits the internet for. When he started two decades ago, it wasn’t as easy to search the web for things you might find in a thrift store or landfill, but now there are apps you can download that will tell you if what you’re looking at is valuable.

The Bowie painting is actually the second painting found in northern Ontario to be sold through Cowley Abbott, according to officials with the auction house. A large-scale canvas by Jack Bush found by a Muskoka resident set a record for the artist when it sold for $870,000 earlier this year.

“We often come upon an important work of art that has been inherited or has been in a family home for many years without the owners knowing anything about the artist or value of the work,” Vice President of Cowley Abbott Lydia Abbott says.