Ontario passes halfway mark of all adults getting fully vaccinated 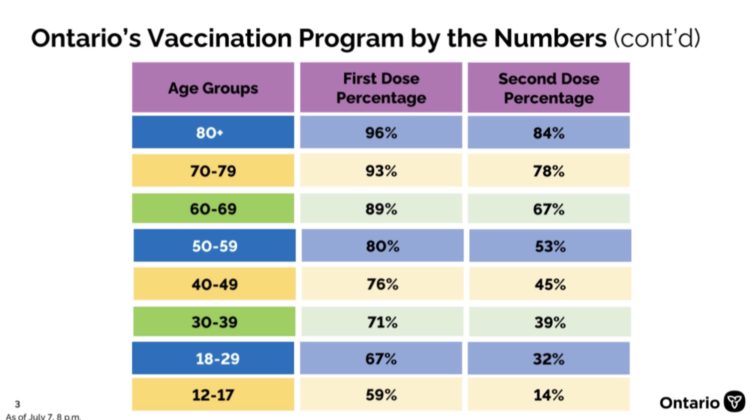 (Supplied by Ontario Ministry of Health)

It was a much more buoyant tone from Ontario’s Health Advisory Table on Thursday when discussing the province’s progress of vaccinating residents.

According to the data, Ontario leads all other jurisdictions in first doses with over 78-percent of adults over 18 having the first shot with 51-percent fully vaccinated.

Over the past month, there have been 29,380 new COVID-19 diagnoses.  According to the experts 83-percent of the new cases were in people who had not been vaccinated at all with 15.6-percent in people who are partially vaccinated and only 1.2-percent in fully inoculated people. Officials say being infected after having both doses is extremely rare.

Officials said Thursday it is extremely important to continue with public education to encourage all age groups to get the jab.

But when it comes to opening up the province into Step Three of the Roadmap to Reopening Dr. Dirk Huyer, the coordinator of the provincial outbreak response team, says people rolling up their sleeves is helping but doesn’t mean a faster reopening, “There’s many factors being considered as far as moving to Step Three…Specifically speaking there no question the vaccine program has had a significant impact on the factors we are considering [to moving into Step Three].”

Some doctors have urged caution into moving too quickly into Step Three, with some suggesting the province needs to extend it past the expected date of July 21st.

The Science Director of the province’s COVID-19 Scientific Advisory Panel says Ontario is “absolutely not” ready to move into Stage Three of the reopening plan on July 21st.  Doctor Peter Juni told CTV that the vaccination targets for Step Three, which have already been surpassed, were based on the Alpha variant of the virus.  But he says the Delta variant now dominates in Ontario and it’s much more contagious and deadly.  Juni says we need to see 75-percent of Ontarians 12 and older completely vaccinated before we move forward.

Grey-Bruce in southwestern Ontario has been named a Delta hotspot along with the ten other regions previously named.  Delta hotspots have received almost 800,000 extra doses of vaccine on top of their regular share for mobile and pop-up clinics.

During July, the province is expected to receive another 5-million-doses of vaccines.  Pfizer deliveries will be weighted heavily toward the end of the month but will be offset by deliveries of Moderna. 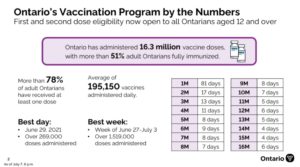 (Supplied by Ontario’s Ministry of Health)