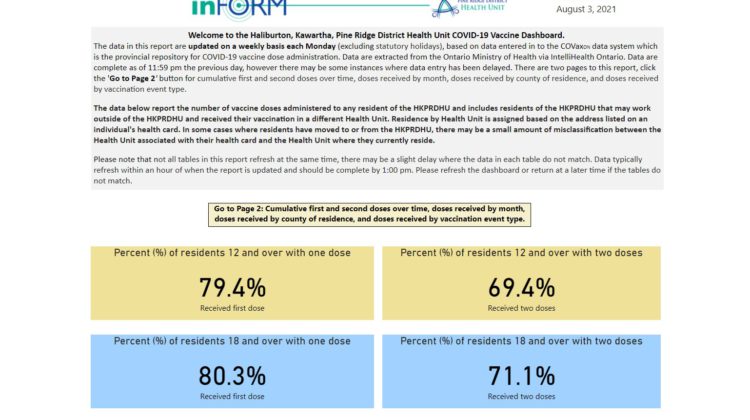 As the province approaches the 21-day mark since moving to step 3 of its Roadmap to Reopen the region’s Medical Officer of Health says she is confident we’ll reach the required vaccine targets to exit the province’s reopening plan.

As of Monday, 79.4 percent of the eligible population in the Haliburton Kawartha Pine Ridge District Health Unit’s region have received their first dose and 69.4 percent are fully vaccinated.

The provincial targets were set at 80 percent of the eligible population with one shot and 70 percent with both.

That places the health unit at about half a percent, or about 900 people, away from both first and second dose targets.

“We’ll certainly reach the 80% for one dose target sooner rather than later given that as of yesterday(Monday) we were at 79 and a half percent so quite close to 80 percent and we should hit that mark certainly by the end of this week,” Dr. Natalie Bocking said in Tuesday’s Health Unit update.

As for the targets set for second doses, she said it will take a little bit longer for us to reach the 75 percent mark but given that the province wants to see a minimum of 70 percent of the eligible population in every health unit vaccinated and as of Monday we were at 69 and a half percent, Dr. Bocking says, “we will reach the 70% Point likely by the end of this week as well so I think that as outlined previously we continue to really be along the same trajectory as the provincial numbers,”